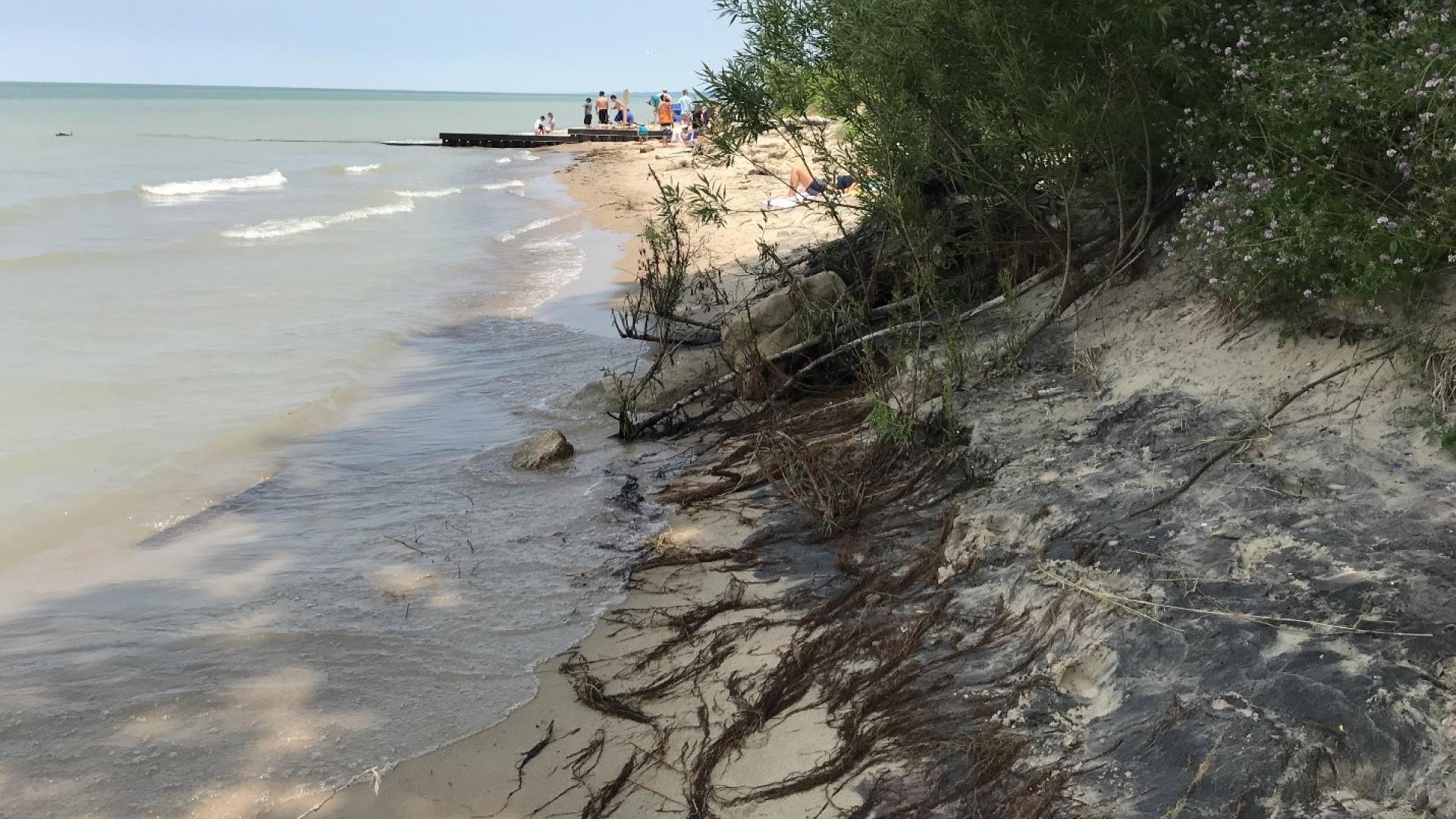 Caption
Water levels are high across the Great Lakes, including this shoreline in Berrien County off Lake Michigan. Credit: Michigan Department of Environment, Great Lakes, and Energy

This is the second article in a series highlighting how communities along the Great Lakes use innovative solutions to adapt to the current period of high water levels, focusing on work supporting shoreline communities in Michigan and Ontario to prepare for extreme water levels in the future. The first article in the series, on Lake Erie and the Niagara River, appeared in our September issue.

Although often considered two distinct water bodies, lakes Michigan and Huron are hydrologically a single lake connected by the Straits of Mackinac. The shoreline of Lake Michigan-Huron is the largest in the Great Lakes, 8,800 kilometers (5,470 miles), including the shorelines of the many islands in Georgian Bay.

Michigan-Huron has continued to experience record-setting high water levels in recent years. These have significantly impacted public and private property, contributing to damage and loss of land and infrastructure along the shoreline.

Communities and organizations along the shoreline are developing and implementing innovative strategies to manage the threats extreme water levels pose to infrastructure, people and the geography of shores along the lakes.

Building tools and resources for shoreline communities in Michigan

Over the past decade, a group of scientists and experts from the University of Michigan, Land Information Access Association, Michigan Technical University and state of Michigan developed recommendations and methods that local communities along the state’s shores can use to prepare for the future.

This project is known as Resilient Great Lakes Coast. It features analytical techniques and information that can be used by communities as they work on master plans, zoning changes, infrastructure improvements and other avenues for resilience along the shores of the Great Lakes.

Due to climate change, scientists expect weather patterns in the Great Lakes to become more extreme – wetter in some parts of the year, drier in others, and generally warmer. At the same time, 100 years of measurements show that Great Lakes water levels are cyclical, reaching high points and low points over the course of decades. Communities along the shores tend to be susceptible to the damage from severe storms and extreme water levels, according to Ronda Wuycheck, coastal resiliency program manager with Michigan’s Department of Environment, Great Lakes and Energy (EGLE).

“We’re trying to frame the thinking at a local level to accept (that) there’s these large forces that can buffet local communities,” said Wuycheck. Communities, Wuycheck said, should be considering what they can do now to prepare for hits from extreme water levels and storms. That way they can come through those circumstances in good shape when they arrive.

While Michigan was the focus of this work, the recommendations and techniques are applicable across the Great Lakes, said Richard Norton, professor of urban and regional planning with the University of Michigan. Norton’s team at the university has been working on tools for the project that can be easily understood and used by local planners who may not have a scientific background.

One such tool is the Michigan Great Lakes Historical Shoreline viewer. This allows users to see how shorelines have changed along lakes Michigan and Huron in terms of lake levels, erosion and infrastructure using 80 years of data, said Guy Meadows, director of the Great Lakes Research Center at Michigan Technical University.

This way, communities can plan ahead based on the trends in their area and past high- and low-water conditions. A viewer including Lake Superior should be completed by the end of 2020, Meadows said.

According to a Resilient Michigan website set up as part of the project, communities such as Fort Gratiot, Port Austin and South Haven are all in the process of using these tools to plan for the future.

“The best thing people can do is moving back from the shore rather than fighting Mother Nature,” Norton said.

“We have to learn how to live with Mother Nature, and that’s hard to do if you’re not used to it, but this is what everybody should be planning for, long-term.”

Armoring property along shorelines may seem like a good idea in the moment, he said, but can inadvertently lead to public beaches eroding away when there are no sources of sediment to replenish them.

Resilient Great Lakes Coast also emphasizes the importance of preparing for extreme water levels well in advance of them occurring.

Meadows said that after high water levels in the 1980s, Michigan had researchers doing shoreline surveys until 2005, by which point water levels had dropped significantly and the urgency to prepare for the inevitable rise had disappeared. Additionally, he said some communities allowed people to build on land that didn’t exist during that 1986 high-water peak, leading to woes today. Conversely, low-water conditions can create navigation problems on the water that persist even after levels rise due to the shift of sediments into navigation channels.

By preparing (and sticking to) long-term resiliency plans, Meadows said, shoreline communities across the state can be prepared for periods of fluctuating water levels.

There are similar efforts to promote coastal resilience along Ontario’s Lake Huron shoreline. Lake Huron’s diverse shoreline is comprised of ecosystems including sand beaches, dunes, bluffs and gullies that are particularly prone to erosion caused by fluctuating water levels.

The Lake Huron Centre for Coastal Conservation is working to enhance coastal resilience by encouraging management actions that will sustain the health of the lake’s coastal ecosystems into the future. A charitable organization established in 1998, the Coastal Centre’s mandate is to provide leadership and expertise to achieve a healthy Lake Huron coastal ecosystem. In 2019, it released a Coastal Action Plan with advice and recommendations for building coastal resilience against a range of stressors for the southeastern shoreline of Lake Huron between Sarnia and Tobermory, Ontario. Partners in the project included corporations such as Enbridge and Bruce Power, Indigenous governments like the Saugeen First Nation and the Aamjiwnaang First Nation, shoreline municipalities like Goderich and Sarnia, provincial and federal agencies and several conservation districts.

The plan includes detailed information on the characteristics and services provided by 10 types of coastal ecosystems along the lakeshore, as well as an overview of the most significant stressors on each of these unique environments. It also provides communities in the region with tools and information to implement environmental management strategies that protect the various shoreline ecosystems from a variety of threats.

For example, the plan identifies coastal development, shoreline hardening and land-use change as the most significant threats to the destruction of sand beaches and dunes along Lake Huron, which can provide an important buffer area between the lake and nearby properties.

The plan points to solutions that can reduce impacts, such as minimum buffer widths between the shoreline and buildings; monitoring the range of effects that stressors have on ecosystem health; increasing public awareness of best management practices and the fragility of coastal ecosystems.

The Coastal Centre also developed a webinar series earlier this year on threats to Lake Huron and recommended management actions. Webinars dealing with high water levels and erosion include Harnessing the Power of Nature, Going with the Flow, and Sand Beach and Dune Restoration.

Communities big and small along the Great Lakes have faced numerous challenges posed by extremely high lake levels over the past several years. Climate change is predicted to bring more frequent, extreme storms to the region that could worsen flood risks in the future.

These conditions cause significant hardship for many who live near the waters or whose livelihoods depend on the lakes.

History shows that what goes up eventually comes down in the Great Lakes. With the cyclical nature of water levels, effective investments by governments at all levels within communities and the support from broader organizations can help minimize damage in the decades to come.