Even with Structures, Changes to Great Lakes Water Levels Will Take Time

If you live in the Great Lakes region, chances are you’re anxious about continued low water levels, and what effect recent Advice to Governments from the IJC will have on the situation.

The bottom line, as Pollack noted: The IJC’s official communication to the Canadian and U.S. governments on the International Upper Great Lakes Study is expected to result in modified regulations for the Lake Superior outflows that will be helpful to shipping, fishing and the ecology of the immediate area, especially during extreme conditions.

But, the new Lake Superior regulation plan is considered to be an incremental improvement compared to “1977A,” the plan in effect since 1990, and won’t result in major changes to lake levels at large. So, an important move stepping forward is to use adaptive management strategies like more monitoring gauges to track evaporation, erosion and other dynamics which will help governments, businesses and individuals be able to make more realistic decisions on their docks, harbor management and infrastructure investments. 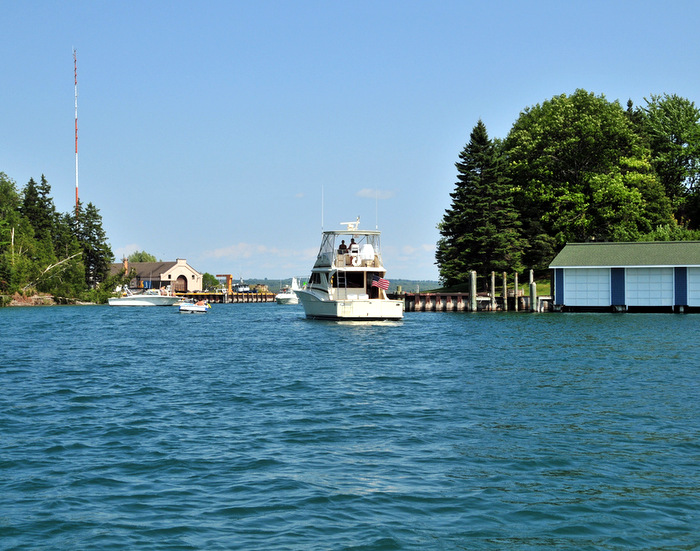 Close to 500 of people came out to the May 6 event in Boyne City, which also included Jennifer McKay, policy specialist at Petoskey’s Tip of the Mitt Watershed Council; and Roger Gauthier, retired U.S. Army Corps of Engineers senior hydrologist and a founder of Restore Our Waters International.

Pollack told the crowd there has been a 14-year run of low water levels in Lake Michigan-Huron.

Those levels are caused by lack of water supply, greater evaporation, years of less ice cover on the lakes and warmer water temperatures associated with climate change.

There is an outflow into the Mississippi basin from the diversion at Chicago, but the International Upper Great Lakes Study and other analyses have concluded that it’s not sufficient enough in volume to be a cause of the low water levels in Michigan-Huron.

In addition, diversions into Lake Superior more than balance the outflow in Chicago (see graphic below). 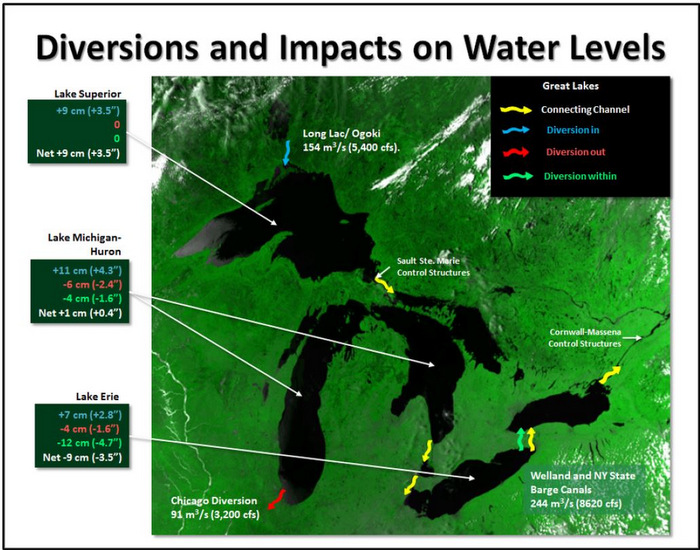 Existing Control Structures and Diversions and the Effect of Diversions on Lake Levels. From the IJC Advice to Governments, April 2013.

Also affecting water levels are channel modifications, especially in the St. Clair River, with dredging in the early 1960s and subsequent erosion lowering the level of Lake Michigan and Lake Huron by a total of as much as 25 centimeters (10 inches), according to International Upper Great Lakes Study.

The Commission’s Advice to Governments on findings and recommendations of the International Upper Great Lakes Study urges the Canadian and U.S. governments to further examine the implications of installing adjustable controls, such as submerged sills or “speed bumps,” in the St. Clair River, to raise Michigan-Huron levels by 13-25 centimeters (about 5-10 inches). The idea is to focus on an option that could primarily provide relief during low water periods but not exacerbate conditions when levels are high.

If such a fix is pursued, it is important to note that the full effects of these structures would not be immediate, but rather once built could take up to a decade to achieve the desired outcome, depending on hydrological conditions.

“I wish we could do more to fix the problem,” Pollack told the audience in Boyne City. Indeed, she didn’t sign the Advice, reflecting her concern about potential negative impacts downstream of a structure and insufficient attention to climate change as an underlying factor leading to what she called “false hopes” that structures would be sufficient to relieve the suffering caused by low water.

As the process moves forward for implementing the new Lake Superior regulation plan and governments consider the IJC Advice, adaptive management and planning still has an important role to play.  In her comments, Pollack stressed the critical importance of consistent funding for the monitoring, modeling and binational coordination needed to support adaptive management.

An IJC task team is already hard at work.