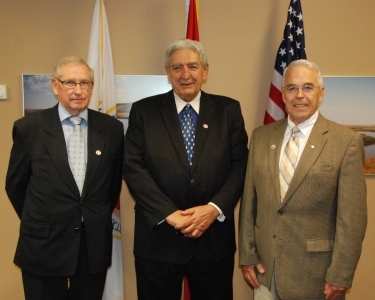 [Ottawa, Ontario] At a meeting of the International Joint Commission (IJC) today in Ottawa presided by Canadian Chair the Hon. Joe Comuzzi, Commissioners Gordon Walker, Q.C. and the Hon. Benoît Bouchard made a solemn declaration to faithfully and impartially perform the duties assigned under the Boundary Waters Treaty. Gordon Walker and Benoît Bouchard were appointed Commissioners of the Canadian Section, International Joint Commission, by Her Majesty on the recommendation of the Governor-in-Council, effective June 6, 2013.

Mr. Gordon Walker of Toronto, Ontario, is a non-practising lawyer and has his own Consulting firm and, as well, is a principal in First Canadian Property Management Limited, both in Toronto. He served as a Canadian Commissioner for three years from 1992 until 1995. In his earlier life he has been an elected city councillor in London, Ontario, following which he served in the Ontario Legislature as Member of Provincial Parliament, and was in the Cabinet serving some 7 years in various posts, as Minister of Correctional Services, Provincial Secretary for Justice, Minister of Consumer and Commercial Relations, and Minister of Industry and Trade.  In 1985 he returned to the practise of law and was counsel to substantial law firms in Toronto.

The Hon. Benoît Bouchard was elected Member of Parliament for Roberval in 1984. Mr. Bouchard served in the Federal Cabinet in several posts from 1986 to 1993 including Minister of Transport, Minister of Industry, Science and Technology and Minister of Health and Welfare. In 1993, he was appointed Ambassador of France. Mr. Bouchard was Chair of the Transportation Safety Board of Canada from 1996 to 2001. Mr. Bouchard has been involved in First Nations issues since 2002 where he served as the representative of the non-Aboriginals in negotiations between Quebec and the Innu Nation of Quebec.  Between 2004 and 2010 he served as the Federal Chief Negotiator with the Mamuitun Corporation representing the Innu Nation of Mashteuitash, Natashquan and Essipit.

The International Joint Commission prevents and resolves disputes between the United States of America and Canada under the 1909 Boundary Waters Treaty and pursues the common good of both countries as an independent and objective advisor to the two governments.