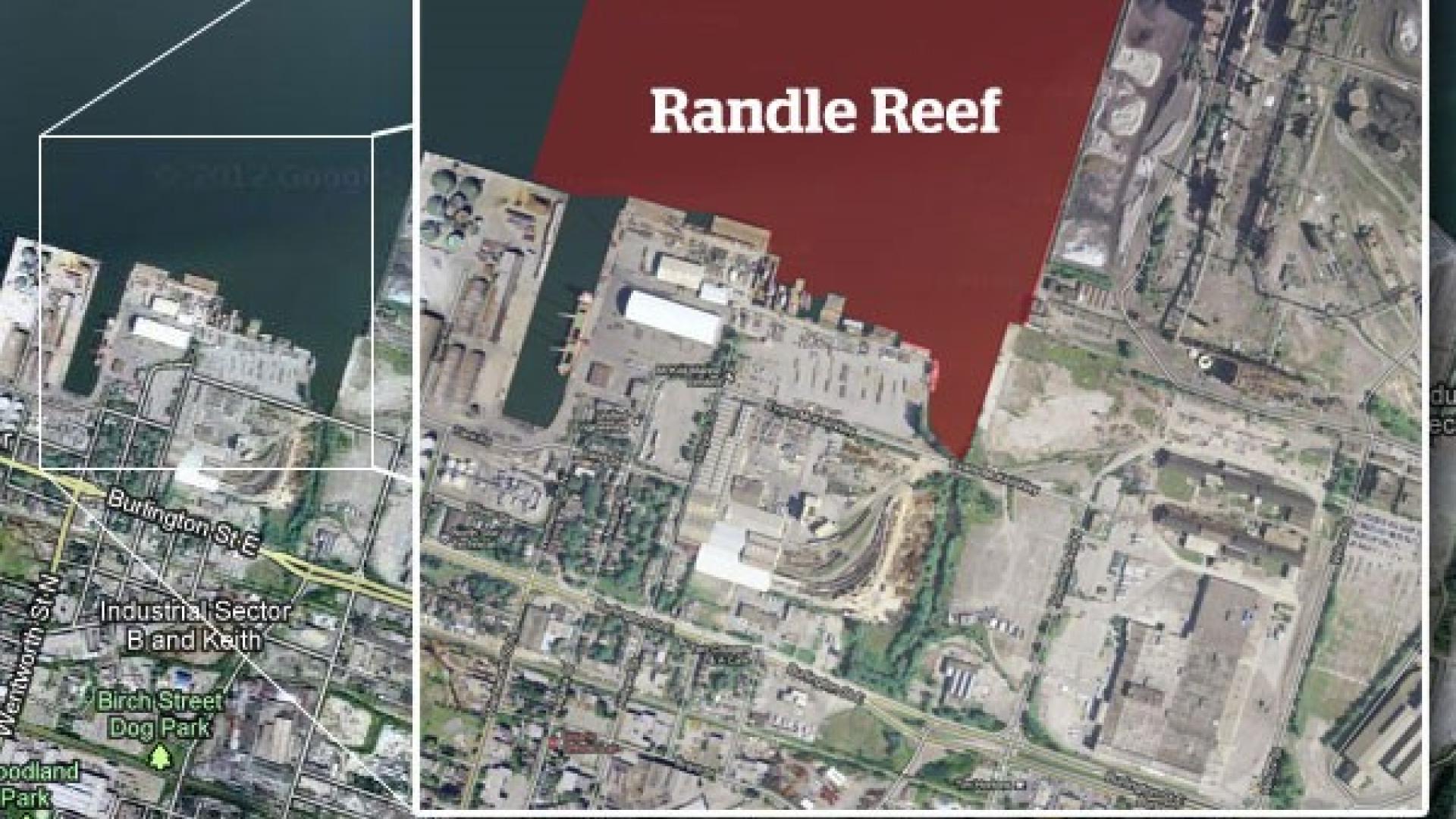 Caption
The location of Randle Reef in Hamilton Harbour, with an approximate footprint of a containment unit. Credit: Randlereef.ca

Contamination dating back to the 1800s off the shore of western Lake Ontario’s Hamilton Harbour in what’s known as Randle Reef is nearing completion of its second phase of containment and cleanup.

Randle Reef is the largest and most contaminated site on the Canadian side of the Great Lakes, having been a dumping ground for untreated sewage and industrial waste for decades prior to water quality regulations.

The reef is about 20 percent of the 60-hectare (148-acre) contaminated area, and was named for a tugboat captain named Harvey Randle, who ran aground there in 1964, notes Chris McLaughlin, executive director of the Bay Area Restoration Council (BARC) and member of the IJC’s Great Lakes Water Quality Board.

Randle Reef is part of the Hamilton Harbour Area of Concern, and was designated as a principal target for restoration in the 1980s. Years of studies led to the current strategy of dredging and containing these waste materials, according to Randlereef.ca, a BARC website.

McLaughlin said the site is primarily contaminated with polycyclic aromatic hydrocarbons (PAHs), with smaller amounts of cold tar and heavy metals. These PAHs were released by industry with practically no restrictions from the 1800s until the early 1960s.

Due to the extent of the contamination and concerns about the risk of removing all of it, the worst of the toxics were sealed in a 6.2-hectare (15.3-acre) steel container in 2017, he said, with walls extending 24 meters (78.7 feet) into the lakebed. The double-walled container, known as an “engineered containment facility” or ECF, is expected to hold these contaminated materials without leakage for at least 200 years. This first phase also concluded with the reconstruction of the pier wall next to the container to allow for dredging alongside it.

Over the last two years, less contaminated sediments from Randle Reef have been dredged and pumped into the steel container through an underwater pipeline. This dredging should be completed in 2020, said Roger Santiago, head of the Sediment Remediation Unit with Environment and Climate Change Canada. As of December 2019, about half of the dredging work had been finished.

The third and final phase should take place in 2021, when Santiago said all these sediments will be dewatered and compressed, with the water being treated for contaminants, tested and released back into Lake Ontario. The ECF will then be impermeably capped to completely isolate the contaminants inside from the environment. The Hamilton Oshawa Port Authority will own the facility and be responsible for monitoring, maintaining and developing the site over its 200-year life span.   Santiago said the future site will be developed as a port facility by the port authority.

McLaughlin said when the containment proposal was first discussed in 2002 there was some criticism that the ECF solution would “punt” the issue down the line. He says that removing that much contamination would pose more risks of spreading it. The containment plan means the contamination isn’t still sitting in the open water waiting for someone else to deal with it.

There also have been complaints that the cleanup’s $138.9 million price tag – paid for by provincial, federal and local governments, the Hamilton Oshawa Port Authority and Stelco – isn’t coming from other private entities also responsible for the pollution.

“None of those entities still exist,” McLaughlin said. “We could argue for decades over who is responsible as a result, but it’s really in the public interest that public money was spent to contain this material.”

Even once the third phase is complete, the Hamilton Harbour Area of Concern (AOC) will still have issues to deal with before the action moves to a monitoring phase for potential delisting.

McLaughlin said there are still issues to resolve with fish communities being degraded, limited habitat, fish consumption issues and some remaining water quality and contamination issues. For example, a private company, ArcerlorMittal Dofasco, is due to clean up contaminated sediments near the Kenilworth Boat Slip over two years starting in 2021.

Still, with the work that’s been completed so far to deal with the legacy of raw sewage and industrial waste, there has been noticeable progress in the AOC, McLaughlin said. More information can be found in a fact sheet about the cleanup of Hamilton Harbour.

There are several anticipated environmental, economic and quality-of-life benefits to this work.

According to a Great Lakes Revival Report published through the International Association for Great Lakes Research, the removal of the biggest source of contamination could help spur business development in the area, and the extra pier space should allow the port authority to expand its operations.

Cleaner water also may spur additional residential and commercial waterfront development, generating up to $170 million in benefits to the local area by 2032. It also should improve water quality and fish and aquatic habit, and prevent human exposure to the contaminants.