The content of this site has been archived and the site is no longer being updated. 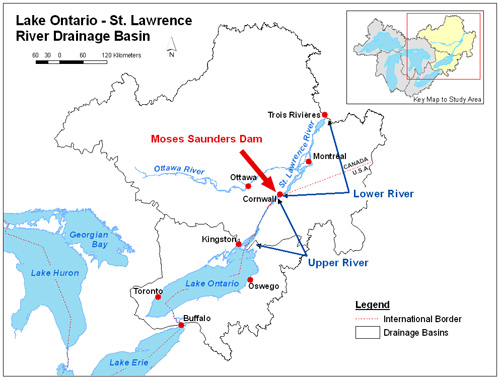 Lake Ontario receives its water from the four other Great Lakes as well as from drainage from its local watershed, and it discharges water into the St. Lawrence River. In the 1950s, Canada and the United States built the St. Lawrence River Hydropower Project, including a dam stretching across the St. Lawrence River from Massena, New York, to Cornwall, Ontario. The International Joint Commission (IJC) issued "Orders of Approval" for the project in 1952 and supplementary orders in 1956. The Orders established criteria for the operation of the system and also established a Control Board to develop and implement plans of regulation to meet the orders. A series of plans was investigated and implemented, and in 1963, a new plan called "1958-D" was approved and put into use. The plan consists of rules for making releases from the Lake every week based on recent water supplies to the Lake, how high the Lake is, the time of year, ice conditions, Ottawa River flows, river stages, and a series of flow limits which bound other rules.