In 2016, as a result of catastrophic flooding along Lake Champlain and the Richelieu River in spring 2011, the governments of Canada and the United States instructed the International Joint Commission (IJC) to “fully explore the causes, impacts, risks and solutions to flooding in the Lake Champlain-Richelieu River basin.” The IJC established a Study Board to oversee the Study and provide recommendations. The IJC also established a Public Advisory Group to assist the Study Board with engaging the public over the course of the Study. The Public Advisory Group publishes this bimonthly newsletter to help keep the public informed about the Lake Champlain Richelieu River (LCRR) flooding Study.

As we enter the final year of the Lake Champlain-Richelieu River Flood Study, we have started to learn outcomes of research from the various Technical Working Groups. These results will inform the Study Board as it crafts recommendations to the IJC and Canadian and US governments. Many of the reports will be summarized in fact sheets (and prepared in both French and English) to aid in sharing findings with members of the public. For instance, a report that summarizes research about the potential for flood mitigation in Lake Champlain and the Richelieu River by temporarily storing water in wetlands or on farm fields in areas that drain to Lake Champlain is being finalized now. Another report in draft format shares key considerations for effective flood communications based on findings from communities around the world. We look forward to sharing these and other reports as they become available from the TWGs.

One of the ways the Lake Champlain-Richelieu River Flood Study is attempting to help mitigate impacts of future floods is by improving flood preparedness and response across the watershed. This includes developing improved flood forecasts and detailed flood-impact maps.

Technical experts working with the Study developed models and maps to assess flooding impacts. These can be used to assist first responders and emergency management planners to plan and prepare more effectively for an upcoming flood.

A series of virtual workshops were held this past winter to review these resources with local officials and solicit their input on modifications that might be more useful to communities. Four workshops were held with local first responders, mayors and provincial officials in Quebec along the Richelieu River-Missisquoi Bay floodplain.  Study experts also conducted in-depth interviews with key emergency managers and planners in the United States.

Most emergency management planners and first responders noted their communities have made flood-response improvements since the devastating 2011 floods and are better prepared to respond to major floods. They also expressed support for the Study’s improved flood forecasting tools and maps.

Continuing our series highlighting subject matter experts who are working closely with the Study Board, we spoke with Jesse Feyen, the US co-lead for the Hydrology, Hydraulics and Mapping (HHM) Technical Working Group.

HHM is focused on improving flood forecasting in the Lake Champlain-Richelieu River basin, and the team is developing upgrades to high-resolution hydrologic models that improve predictions of runoff into Lake Champlain. These upgrades take into account the impact of wind on lake levels, as well as how lake currents are impacted by tributary inflows and wind speed and direction. 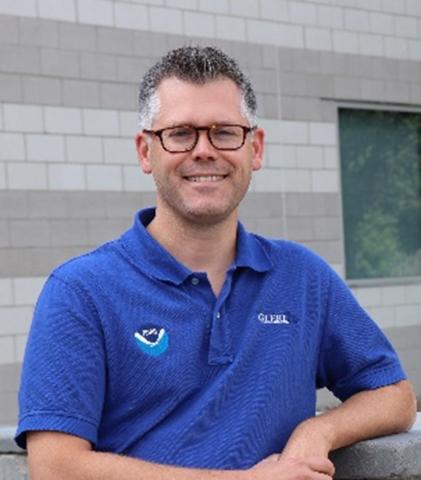 In addition to his work with the Study, Jesse is the deputy director of a US National Oceanic and Atmospheric Administration (NOAA) research laboratory on the Great Lakes that explores environmental health and conditions. Topics researched range from physical conditions such as lake levels and circulation to environmental conditions such as cyanobacteria blooms (sometimes called harmful algal blooms) and impacts of invasive species on the food web. He has spent the last 25 years working on modeling and predicting coastal flooding. His work included helping to develop new US flood forecasting products for hurricane storm surges — an effort that earned him the Department of Commerce’s Gold Medal.

The LRCC Study considers a number of Performance Indicators in assessing the potential benefits and impacts of any recommended course of action. In this edition of The Current, we look at the issue of archaeological site erosion risks caused by high water levels in the basin.

By examining existing State and Provincial data, the Study has identified more than 300 archaeological dig sites, burial sites and other culturally significant sites in the floodplain and found 147 would have been flooded during the 2011 flood. The Study Board enlisted the assistance of an archaeologist from the Waban-Aki Nation who is characterizing sites along the Richelieu River and Lake Champlain (Missisquoi Bay) to determine the types and impacts of erosion at the sites. With this information, work is now underway to establish the performance indicator itself.

While it is always preferable to leave archaeological sites in place as witnesses to the past — especially burial sites — if a potential loss of important artifacts from flooding or erosion is likely, experts might undertake what is known as a salvage excavation to protect the materials. Much of the archaeological findings in the basin reflect the history of the W8banakiak and Kanien’kehá:ka, descendants of the Indigenous populations that were found across the northeastern United States and Canada 12,000 years ago. The lake and river (known as Magwaizibo (Richelieu River) and Pitawbagok (Lake Champlain) were part of a travel network used by the First Nations for thousands of years.

The study welcomed Jeff Kart as the IJC’s US communications liaison for the Lake Champlain Richelieu River Study. Jeff has worked for the International Joint Commission since 2010, and is executive editor for the IJC’s two newsletters, Water Matters and Great Lakes Connection. (You can read those newsletters here: https://ijc.org/en/library/newsletter ). A former journalist, Jeff works out of Michigan near Saginaw Bay, part of the Great Lakes basin area, as a contractor to the IJC’s US Section Office in Washington, D.C. Jeff’s counterpart on the study is Christina Chiasson, the IJC’s Canadian communications liaison for the LCRR study who we welcomed to the study in September 2020.

Stay updated on the Study Board’s work by signing up to receive electronic updates via our email distribution list. Click on our home page (https://www.ijc.org/en/lcrr) and scroll to the bottom to join.