In 2016, as a result of catastrophic flooding along Lake Champlain and the Richelieu River in spring 2011, the governments of Canada and the United States instructed the International Joint Commission (IJC) to “fully explore the causes, impacts, risks and solutions to flooding in the Lake Champlain-Richelieu River basin.” The IJC established a Study Board to oversee the Study and to provide recommendations. The IJC also established a Public Advisory Group to assist the Study Board with engaging the public over the course of the Study. The Public Advisory Group publishes this bimonthly newsletter to help keep the public informed about the Lake Champlain Richelieu River (LCRR) flooding study.

We are constantly reminded what a great resource the Lake Champlain – Richelieu River basin is, but at the same time, we recognize it is a complex ecosystem that isn’t always easy to measure or quantify. In this issue, our “Study News” highlights our efforts to consider large waves that can occur during a major flood in our forecasting tools. Although we have been developing several indicators to measure the reduction of impacts of flood waters when considering a potential mitigation structure or measure, recent low Lake Champlain water levels and initial climate change work remind us that while solving unwanted impacts of major flooding, we should not be creating problems and restrictions associated with low flows. Over these last few months of the LCRR study, all the pieces will be coming together, and as a result, we will be gaining a better understanding of both this unique basin and its people.

High winds and waves can aggravate damage to shoreline properties during a flood as witnessed along Lake Champlain during the spring 2011 flood. As part of its efforts to gather data on Lake Champlain, the U.S. National Oceanic and Atmospheric Administration (NOAA) deployed a buoy this summer to measure wave heights on the lake. The data will be used to validate a new experimental model output for Lake Champlain, and the principal investigator on the project is Jesse Feyen, the US co-lead for the Hydrology, Hydraulics and Mapping (HHM) Technical Working Group of the LCRR study.

The project will improve public safety on Lake Champlain by contributing to flood preparedness and response along the shores. This new Lake Champlain buoy and the associated experimental wave model are part of a five-year NOAA project to create and prepare for transition a real-time flood forecast modeling system for the Lake Champlain-Richelieu River (LCRR) basin WAVEWATCH II. The buoy was deployed in the middle of the lake to collect wave height observations during the spring and summer that will validate NOAA’s I model for Lake Champlain.

Researchers at the Cooperative Institute for Great Lakes Research (CIGLR) are currently leading the development of this model, which is already providing experimental forecasts that can be found here. The buoy’s environmental data can be found here.

The buoy and the experimental wave model are of significant interest to the region’s National Weather Service Weather Forecast Offices and Canadian weather forecasters, who have already shared the data with mariners in the region. The work is funded by the International Joint Commission’s Lake Champlain-Richelieu River Study Board.

Concluding our series highlighting subject matter experts who are working closely with the Study Board, we spoke with Dr. Mathieu Roy, the interim Canadian co-lead for the Resource Response Technical Work Group. Mathieu was appointed last fall to cover for Marianne Bachand who is on temporary leave, though he has been involved with the LCRR Study since 2018.

Mathieu coordinates the development of various performance indicators to estimate flood impacts and evaluate flood mitigation measures by collaborating with academic and government experts in various fields. Those indicators, which are part of the study’s ISEE model, describe potential impacts on society, the economy, the natural environment, and indigenous resources.

As a project coordinator with the Hydrodynamics and Ecohydraulics Section at Environment and Climate Change Canada in Quebec City, Mathieu has been involved in the study of rivers and aquatic ecology for a decade, with a current focus on wildlife habitat modelling, project management and scientific analysis.

The study has already developed a number of performance indicators to assess the likely impacts of flood mitigation measures that the study board may recommend at the conclusion of its work. One area that has recently been receiving more attention is estimating the impact of mitigation measures on low flows and water intakes (such as for drinking water). Low water levels on Lake Champlain can negatively affect boating and water intakes, as well as natural habitats and potentially, lead to harmful algal blooms. Study experts are looking into how to factor this into their current analysis.

Extremely low water levels in the lake were observed in the early 1900s, again in the 1930s, mid-1960s and in 2002. More recently, levels have remained low in the lake since 2019. During various meetings in the basin, study experts have heard about the impacts of low lake levels on recreational boating and marinas, including the need for marinas to dredge nearby areas to provide sufficient draft for boaters.

The installation of a crump weir in the Richelieu River could raise low lake levels during dry periods, while also reducing high levels during floods. The extent of any impact on water levels by a crump weir continues to be studied by the LCRR technical working groups. Recent outreach to Lake Champlain marina owners and operators resulted in significant interest in the idea of the weir for maintaining or raising low water levels.

In addition to technical experts, the study works closely with community members who volunteer their time on the Public Advisory Group, or PAG. The 12 members of the PAG include individuals from Canada and the United States throughout the watershed study area. We introduce you to two members in this issue of The Current.

Teresa Gagnon is a riverside resident in Sabrevois, Quebec and her home was flooded during the spring 2011 Lake Champlain-Richelieu River flood. A municipality counselor from 2013 – 2017, Teresa is also a member of the Association des Riverains de la plaine inondable, whose mission is to help protect and inform the MRC (that includes Saint-Jean-sur-Richelieu) riverside residents of their rights and how to receive assistance in case of flooding. 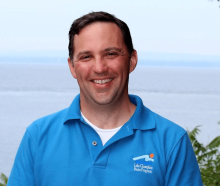 Eric Howe is the Program Director for the Lake Champlain Basin Program and Champlain Valley National Heritage Partnership in Grand Isle, VT, and has been working in the field of lake management since starting his career on Lake George in 1995. He has been involved in Lake Champlain issues for more than 25 years. Eric’s background in water quality, fisheries, aquatic invasive species management and public policy on lake management has been an important part of the experience he brings when participating in the PAG.

To ensure all of the necessary data products required for the study are identified, the Study Board has created a Study Data Products Committee, and recently named the two co-leads for the committee. Erika Klyszejko, an engineering advisor with the IJC (International Joint Commission), is the Canadian co-lead and Lacey Mason, data manager for the Great Lakes Environmental Research Laboratory, is the U.S. co-lead.

Erika previously worked with Environment and Climate Change Canada, and has a background in hydrological modeling.

In addition to her role with the GLERL, Lacey also works on the environmental data management committee through the U.S. National Oceanic and Atmospheric Administration.

On the Web
Stay updated on the Study Board’s work by signing up to receive electronic updates via our email distribution list. Click on our home page (https://www.ijc.org/en/lcrr)  and scroll to the bottom to join.