Water supplies into Lake Ontario vary from year-to-year (see Figure 2, top).  High water supplies led to high Lake Ontario levels in the past, including in 1973, 1976, 1993, and 1998.  During the first six months of 2017, the water supplies into Lake Ontario were the fourth highest since 1918, largely due to high precipitation.  The Ottawa River also set records in April and May of 2017, discharging an unprecedented amount of water into the St. Lawrence River near Montreal (Figure 2, bottom).  In 2019, records were broken for the total amount of water coming into Lake Ontario (primarily from Lake Erie) from January to June, and for the high amount of water flowing from the Ottawa River into the St. Lawrence River.  Inflow from the Upper Great Lakes through Lake Erie continues to be high due to extremely wet weather over the upper basin.

Outflow with Plans 1958-D and 2014. Both regulation plans have “outflow rules” that determine how much water is released

through the Moses-Saunders Dam.  Outflow is monitored by the International Lake Ontario - St. Lawrence River Board to ensure that it meets the conditions for operation set by the International Joint Commission.  During extremely wet conditions, outflows with the new plan are very similar to those that would have occurred operating with the old plan.  This is because the Plan 2014 rules that apply during such wet conditions were designed to reflect the Plan 1958-D rules plus what was learned through years of experience with deviations from Plan 1958-D during similarly wet conditions in the past.  Under Plan 1958-D, the Board needed to deviate frequently from the outflow rules to address conditions (the plan plus deviations is known as 1958-DD).  Deviations from Plan 1958-D were allowed when water supply conditions were outside the range used in the development of the plan, as was the case on several occasions from 1960 to 2000.  The range of water supply conditions used to develop Plan 2014 was expanded to include these more recent conditions and extreme events, as well as potential future scenarios.  Moreover, deviations from Plan 1958-D rules were also often needed to address winter ice conditions, adjust for the effects of high or low Ottawa River flows on the lower St. Lawrence River, and to maximize outflows to moderate Lake Ontario flooding while maintaining safe conditions for navigation.  These conditions had to be addressed by deviations from Plan 1958-D, but are now included and considered directly in the outflow rules for Plan 2014. Consequently, under Plan 2014, the Board is still allowed to deviate from the outflow rules when extremely wet conditions cause water levels on Lake Ontario to exceed seasonal high trigger levels, or when extremely dry conditions cause lake levels to fall below seasonal low trigger levels, but when levels are less extreme the Plan 2014 rules are generally expected to be applied.


Simulating 1958-DD outflows for 2017 and 2019. In both 2017 and 2019, when lake levels exceeded the trigger levels, outflows were increased to exceed the outflows specified by Plan 2014. Prior to trigger levels being exceeded, outflows were largely determined by the Plan 2014 outflow rules that are based on operations under Plan 1958-DD.  What the outflow deviations would have been in 2017 and 2019 had Plan 1958-DD been in effect are hard to estimate with certainty. Despite this uncertainty, a high degree of confidence in the simulation of Plan 1958-DD for 2017 exists for three reasons: (1.) Because Plan 2014 was first implemented in 2017, both plans would have started the year at exactly the same water level. (2.)  Extremely wet conditions in 2017 caused maximum outflows to be released and that would have largely been the case under both plans. (3.) The outflow rules of Plan 2014 that applied during most of 2017 were based on similar rules and decisions made by the Board under Plan 1958-D, including deviations to manage ice conditions, reduce flooding impacts both upstream and downstream of the dam, and to maintain safe conditions for navigation.

Comparing the Plans for 2019. A similar analysis for the hydrologic conditions of 2019 is more complex due to the longer time that Plan 2014 has been in effect and the greater range of uncertainty in possible deviations that could have been made under Plan 1958-DD leading-up to spring 2019. Nonetheless, the extremely high water supplies to Lake Ontario from record-high inflows from Lake Erie and above-average precipitation would have required similar outflows under both plans.  For example, starting in the summer of 2018, the Plan 2014 maximum outflow for safe navigation was applied even though Lake Ontario water levels had declined to seasonal averages.  Outflows remained high into the fall, causing extremely low levels on Lake St. Lawrence, the forebay just upstream of Moses-Saunders Dam. 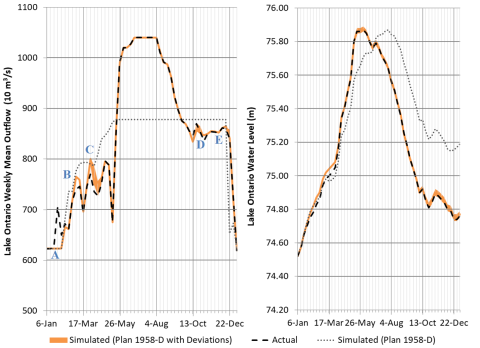 At this time, outflows under both plans would have been limited in order to maintain safe conditions for commercial navigation and recreational boaters on the upper St. Lawrence River.  In fact, under Plan 1958-D, the Board may have deviated from the plan to lower outflows and provide more relief to boaters, thus increasing water levels on Lake Ontario by a small amount.  In January 2019, winter weather conditions would have dictated the same outflow reductions under both plans to ensure safe ice formation and lower the risk of ice jams in the St. Lawrence River.  Stable ice conditions allowed high outflows in February and March 2019, but also again caused low water levels upstream of the dam, which increased risk to municipal water intakes (this risk would have been considered under both plans).  As ice melted in March, and prior to the Seaway opening later that month, outflows remained very high (just slightly below maximum values).  Given that forecasts at the start of March 2019 did not suggest the extreme weather to come, it is unlikely that the Board would have deviated from Plan 1958-D to increase the outflow significantly; had the Board done so, this would have reduced Lake Ontario water levels by at most 5 centimeters (less than 2 inches). When the Seaway opened in late-March, Plan 2014 again set outflows at maximum safe rates for navigation, as would have been done under Plan 1958-DD.  During April and May, the record-breaking Ottawa River flows and severe flooding downstream of the dam would have limited outflows from Lake Ontario under both plans.  Finally, during this entire period, water supplies coming into Lake Ontario were consistently high, reaching record-breaking levels in May.  In conclusion, neither regulation plan would have been able to take significantly more water off Lake Ontario quickly enough to make a meaningful difference in water levels and prevent the flooding in 2019.