This directive was created in conjunction with the proposed revised Order of Approval. It provides specific protocols and guidance to the International Lake Ontario-St. Lawrence River Board for implementing a regulation plan approved by the Commission, particularly as they relate to making operational adjustments, deviating from that plan, and managing extreme conditions. This directive updates and replaces all past directives on these topics to the former International St. Lawrence River Board of Control, including letters from the International Joint Commission (the Commission) dated May 5, 1961 and October 18, 1963 that vested the Board with limited authority to deviate from the approved regulation plan.

Plan 2014 is the combination of the mechanistic release rules labeled “Bv7” (described in Annex B of the June 2014 report on Plan 2014) together with discretionary decisions made by the International Lake Ontario - St. Lawrence River Board to deviate from the flows specified by the rules of Bv7 according to this directive on deviations. In that regard, Bv7 is analogous to Plan 1958-D; each is a set of release rules ( algorithms ) that produce an unambiguous release amount each week.

Under the 2016 Supplementary Order of Approval, the International Lake Ontario – St. Lawrence River Board is responsible for ensuring compliance with the Order pertaining to the regulation of the St. Lawrence River and Lake Ontario and any requirements outlined in directives from the Commission. This includes setting weekly discharges for the St. Lawrence River through the flow control structures of the Moses-Saunders hydro-electric plant located at Cornwall-Massena according to the regulation plan approved by the Commission. Bv7 release rules are designed to handle a broader range of water supply situations than the previous release rules (Plan 1958-D). In most instances, it will be important to release flows as determined by the release rules in order to realize its expected benefits. Therefore, the Commission anticipates fewer, more limited instances where flow releases would differ from those of the release rules than was the case with 1958-D.

The following sections of this directive describe and differentiate between operational adjustments, minor, major, and emergency deviations. This directive also explains when and how the Board can adjust and deviate from the outflows prescribed by the regulation plan. If the Board cannot establish consensus regarding deviations from plan outflows, then the issue shall be raised immediately to the Commission through the Commission’s Engineering Advisors located in Washington, DC and Ottawa, ON. In such cases, the Board must reach consensus on an interim outflow in consideration of the particular circumstances at the time and that is consistent with the Treaty, while the Commission makes a decision.

Operational Adjustments due to Inaccurate Forecasts

The rules and logic of the plan provide protection against extreme high and low levels downstream in balance with Lake Ontario levels. The Board shall oversee operational adjustments to successfully manage rapidly varying flood and low flows coming from the Ottawa River in accordance with the rules set out in the regulation plan, unless conditions require minor or major deviations as defined below. The plan also includes rules, based on decades of operational experience, to form and manage the ice cover in the river reaches of importance upstream of the Moses-Saunders and Beauharnois hydro-electric plants. The Board shall also continue flow changes as needed for ice management in these river reaches consistent with the intent of the plan. Ottawa River discharges and St. Lawrence River ice conditions can change significantly from day-to-day, and the week-ahead forecasts of Ottawa River flows and St. Lawrence River ice conditions used for regulation calculations are subject to rapid variations due to changing weather conditions. Therefore, short-term within-the-week flow adjustments will be made when needed to avoid flooding near Montreal consistent with the intent of the plan when the Ottawa River flow is very high and changing rapidly. Such adjustments will also be made when required to maintain St. Lawrence River levels above the minimums specified in the plan when inflows to the river are varying. As ice conditions can vary quickly due to changing weather conditions, it is anticipated that adjustments will also be necessary for the formation of a smooth ice cover to prevent ice jams in the International Rapids Section of the St. Lawrence River and the Beauharnois Canal. Within-the-week flow adjustments may also be required to address other unexpected within-the-week changes in river conditions. These flow adjustments are consistent with and accounted for in the design of the regulation plan, which was developed with the assumption that the flows during the Ottawa River freshet, droughts and the ice formation would be adjusted in practice within the week as they have been with Plan 1958DD. Therefore, no future offsetting adjustments are needed to compensate for within-the-week flow adjustments due to uncertainties in forecasts of Ottawa River flows, St. Lawrence River ice conditions, or other weather-related circumstances that are made to maintain the intent of the Plan.

The Board may direct its Regulation Representatives to be responsible for monitoring conditions, making operational flow adjustments and tracking their use. Tracking records will be used to replicate plan results, as needed for subsequent plan reviews.

To respond to short-term needs on the St. Lawrence River, the Commission will allow the Board to make minor discretionary deviations from the approved regulation plan that have no appreciable effect on Lake Ontario levels. Minor deviations are made to provide beneficial effects or relief from adverse effects to an interest, when this can be done without appreciable adverse effects to other interests and is consistent with the requirements of the Order of Approval. Unlike flow adjustments made to maintain the intent of the plan, minor deviations from the plan require accounting and flow restoration.

Minor deviations, while not necessarily limited to only these situations, could include those to address contingencies such as:

These deviations will affect levels on Lake St. Lawrence and the St. Lawrence River downstream to Montreal, but due to the relatively small volume of water involved, such deviations would have a very minor effect on Lake Ontario levels and the river upstream of Cardinal, ON. The intention is for minor flow deviations to be restored by equivalent offsetting deviations from the plan flow as soon as conditions permit to avoid or minimize cumulative impacts on the Lake Ontario level and avoid changing the balance of benefits under the approved regulation plan. Some discretion will be left to the Board as to whether conditions permit the restoration of the volume of water released or held back by these deviations. However, the Board shall not allow the cumulative effect of these minor deviations to cause the Lake Ontario level to vary by more than +/- 2 cm from that which would have occurred had the releases prescribed by the approved plan been strictly followed. The intent is to accommodate, where possible, those needs of the river interests that are difficult to foresee and build into the plan, while being consistent with the intent of the regulation plan and Order of Approval.

The Board will provide post-action reports to the Commission of these minor deviations from plan flows as part of normal semi-annual reporting requirements. However, if circumstances are such that minor deviations cause the Lake Ontario level to vary more than +/- 2 cm from the level resulting from the approved plan (i.e., potentially having a significant impact on Lake Ontario levels), then the Board shall advise the Commission in advance as soon as the potential need for the longer-term deviation is known. If there is a need for a longer-term deviation, the Board must provide a flow restoration plan and obtain approval from the Commission, or obtain a waiver from the Commission not requiring flow restoration. It is intended that such a waiver be rarely used so as to avoid changing the balance of benefits associated with the approved regulation plan.

The Board may direct its Regulation Representatives to approve minor deviations from plan flow, within parameters set by the Board.

Major deviations are significant departures from the approved regulation plan that are made in response to extreme high or low levels of Lake Ontario in accordance with criterion H14 of the revised Order of Approval:

Major deviations are expected to significantly alter the level of Lake Ontario compared to the level that would occur by following the approved regulation plan. Although the approved regulation plan was developed to perform under a wide range of hydrological conditions and with the experience gained in four decades of regulation operations, extreme high or low Lake Ontario water levels could require major deviations from the plan. Extreme high and low Lake Ontario levels to trigger major deviations are set out in Table 1 of this directive based on quarter-month levels through the year. If the Board expects that lake levels will be outside the range defined by the trigger levels, then based on analysis using the technical expertise at its disposal, the Board will inform the Commission that it expects to make a major deviation from the plan once the trigger level is reached to moderate the extreme levels. The Board is authorized to use its discretion to set flows in such conditions and deviate from the approved plan to provide balanced relief to the degree possible, upstream and downstream, in accordance with criterion H14 and the Treaty. For example, if the lake level is above the high trigger, then the Board could decide to increase the flow to the maximum specified by the limits used in the approved regulation plan if the plan flow is not already at this maximum, or it could apply the maximum flow limits used in Plan 1958DD, or it could release another flow consistent with criterion H14. While major deviations take downstream interests into account, they are not triggered by downstream levels, as the Bv7 release rules are designed to prevent extreme levels downstream, provided that Lake Ontario levels are not at extremes.

The Commission emphasizes that for the objectives of the approved regulation plan to be met, the regulation plan needs to be followed until water levels reach any of the defined triggers. The Board shall keep the Commission informed of the difference between the Lake Ontario level and the defined trigger levels. The Board will provide regular reports on implementation of the major deviation to the Commission. As the extreme event ends, the Board shall develop for Commission approval a strategy to return to plan flows and recommendations as to whether or not equivalent offsetting deviations from the plan flow should be made, as appropriate on a case-by-case basis.

Emergency situations are considered to be those that threaten the physical integrity of the water management system and that may lead to a loss of the ability to control the flows in the system, or unusual life-threatening situations. Examples could include the failure of a lock gate, flooding of the hydropower control works, failure of a spillway gate, dike failure, a regional power outage, or other such active or imminent incidents. Such incidents arise only on extremely rare occasions. In such cases, immediate action is required and the Board is directed to authorize the Regulation Representatives to direct and approve, on the Board’s behalf, emergency flow changes as required. The Regulation Representatives will report any such emergency actions as soon as possible to the Board and immediately thereafter the Board will report such actions to the Commission.

The Board will determine the need to make subsequent equivalent offsetting deviations from the plan flow, as appropriate, on a case-by-case basis. 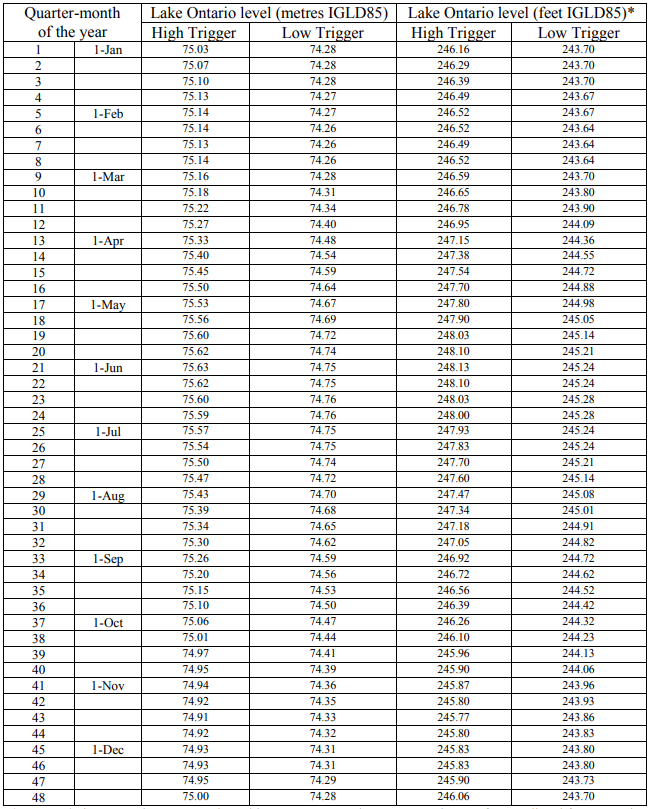