Anglers and other users of the St. Marys Rapids, please be advised of the increased flows and water levels that will be experienced in the Rapids in June. After the Compensating Works gate movements scheduled for Monday June 6, the St. Marys Rapids flow is expected to be approximately 720 cubic meters per second (m3/s) (25.4 thousand cubic feet per second (tcfs)) which is the highest flow in the Rapids since 2019.

At these flows, some flooding of low-lying areas of Whitefish Island is expected as additional gates are opened and flows increase. As a result, some recreational trails and features in these areas will likely be flooded, and users are encouraged to use extreme caution.

The Board expects the total outflow to be 2,470 m3/s (87.2 tcfs) in June, which is as prescribed by Lake Superior Regulation Plan 2012. As a result of this increase in total outflow, combined with ongoing repairs at the Canadian hydropower plant, the gate setting at the Compensating Works will be increased to the equivalent of approximately five gates fully open on Monday, June 6. This will be achieved by raising Gates #7 through #12 to a setting of 162 cm (64 in) open. Gate #16 will be opened to a setting 5 cm (2 in) to provide improved efficiency of sea lamprey trapping conducted annually by the U.S. Fish and Wildlife Service.  There will be no change to the setting of Gate #1, which supplies a flow of about 15 m3/s to the channel north of the Fishery Remedial Dike. 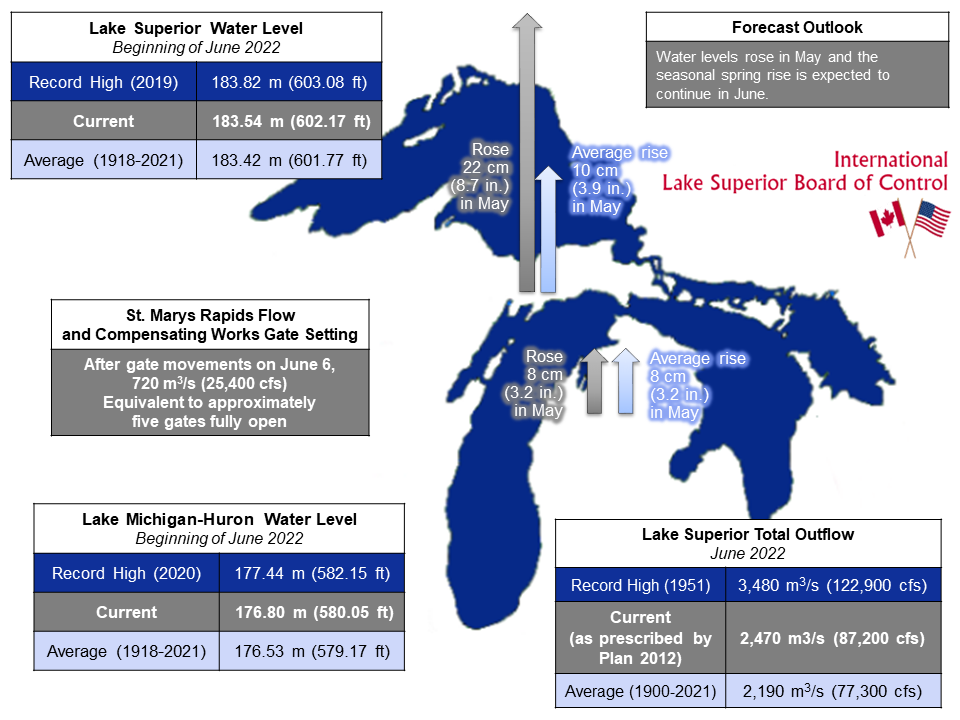