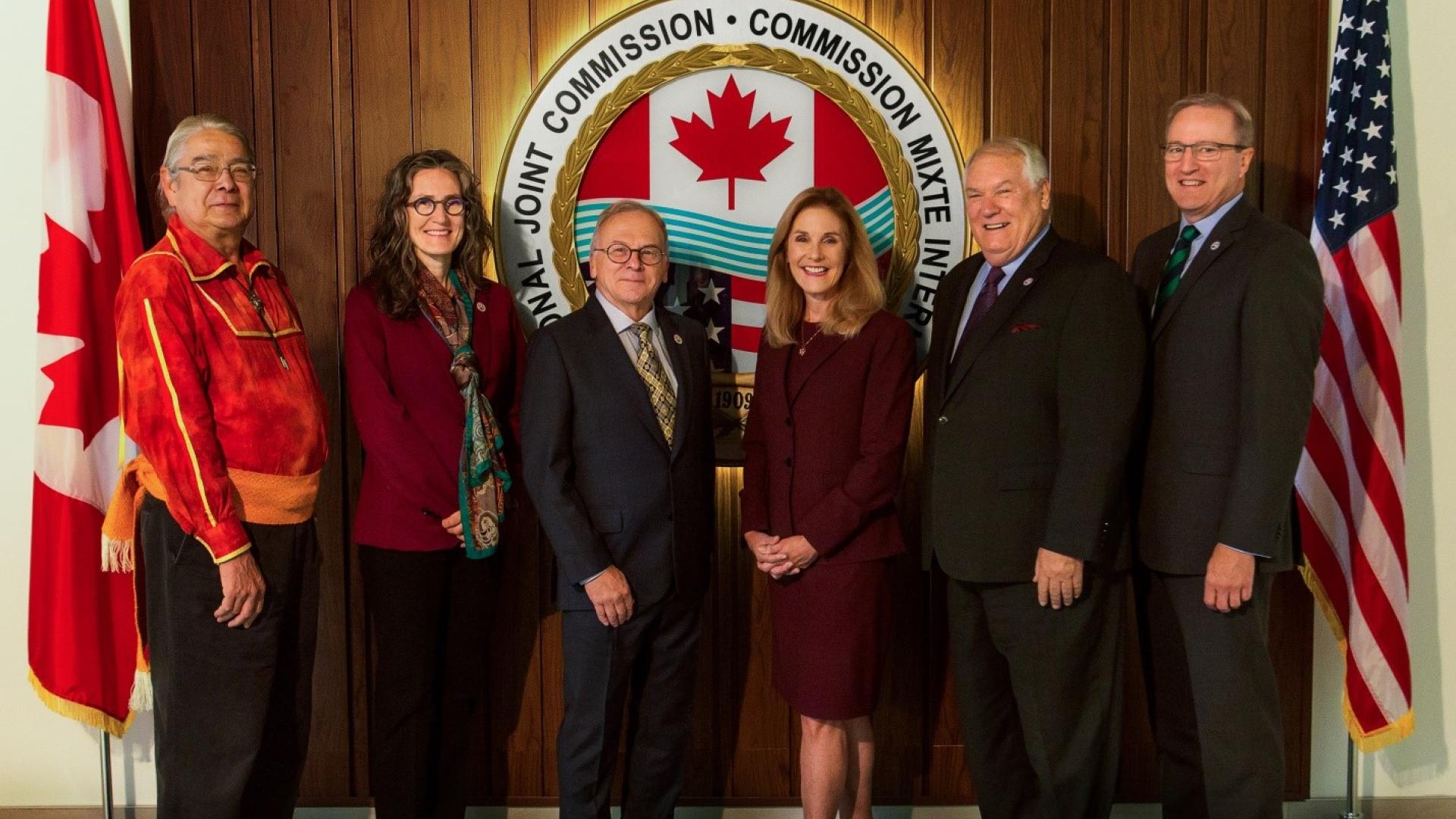 Caption
The IJC Commissioners in Ottawa in October 2019. Co-Chairs Pierre Béland and Jane Corwin are in the center.

The International Joint Commission has been chaired by Pierre Béland of Canada and Jane Corwin of the United States since May 2019. The two grew up in different areas of the Great Lakes basin and have different histories with the IJC. Yet they share priorities that they hope to see the organization address in 2020 and the years ahead.

Canadian Co-Chair Béland said his path to the IJC started with beluga whales.

Béland was working as a marine biologist and oceanographer at the time, studying the whales at the outlet of the St. Lawrence River. He discovered the creatures were full of toxic chemicals, pesticides and insecticides – including polychlorinated biphenyls (PCBs), DDT and Mirex, an insecticide he didn’t recognize.

The only other species he and other researchers found contaminated with the now-banned Mirex were American eels. Eventually, they determined the eels were picking up the chemical while migrating between the Atlantic Ocean and Lake Ontario – and the belugas were eating them while the eels moved back and forth.

“That was an incredible link,” Béland said. “It’s how I got my introduction to the Great Lakes community of research.”

Béland‘s career as a scientist has taken him around the world from his hometown of Quebec City. He’s worked on reconstructing ecosystems that the dinosaurs lived in with the National Museums of Canada, studying dolphins in India’s Ganges River and hosting a weekly television series on the environment. In 1995, his links to Great Lakes research saw him appointed as an IJC Commissioner for the first time, serving through 1998. Halfway through his term, he was named acting Canadian co-chair.

At the time, his focus as a Commissioner was on convincing the governments to look at transboundary waterways more holistically, as a part of broader watersheds. This was exemplified in a 1998 report called “The IJC and the 21st Century” and would ultimately be adopted as the still-active International Watersheds Initiative and the creation of watershed boards, which consider the needs of the people, wildlife and water in the region.

In 2018, after he’d recently moved back to Montreal and had been running a business selling scientific equipment for aquatic research, Beland learned the IJC was advertising for new Commissioners, and considered it the perfect time to return. He sold the business and applied, ultimately being selected as the new Canadian co-chair.

Corwin: Next Step in a Public Service Career

US Co-Chair Corwin spent much of her life living in Buffalo, New York, near the Niagara River and Lakes Erie and Ontario. There, she’d been a successful businesswoman for years, before selling the business in 2004. When an opportunity arose to run for the New York State Assembly, Corwin was interested.

“I thought it was a good point in my life to pursue something like that, with my children growing up and leaving the house,” Corwin said.

She was elected in 2008 and served as an assemblywoman through 2016, spending that entire time on the state’s Environmental Conservation Committee. While there, she learned a great deal about a variety of environmental issues, ranging from water quality, invasive species and ballast water to cleaning up contaminated “brownfield” sites in cities.

“It made me realize just how important paying attention to our environment is, because it really does impact every aspect of our lives,” she said.

It was also in the Assembly that she became aware of the IJC’s role in interacting with governments as an international organization. She said the agency’s unique perspective and approach to problem-solving interested her. When the opportunity arose to join the IJC, Corwin was happy to take up the role as co-chair.

As co-chair, Corwin says her past experience as a representative allows her to appreciate the different perspectives and values that individuals have toward their local water systems. Where one person may see a recreational opportunity, another might prioritize it for drinking or as part of their cultural traditions.

“Coming in as a Commissioner, I think it’s important to consider all those interests in the water when we make our decisions,” Corwin said.

Béland and Corwin say climate change is a major priority for them. Corwin says the phenomenon is exacerbating issues across the transboundary, notably high Great Lakes water levels due to a series of wet years in the region. She and other Commissioners have been dealing with high levels since their terms began.

Béland says if climate change continues to result in wetter years in the Great Lakes, then there’s very little regulation, rule curves or dams can do to lower high water levels across such a massive system. Given these realities, the co-chairs are interested in how the IJC can help governments adapt their own policies toward minimizing the damages from extreme weather conditions.

“How can we adapt to this situation – whether it’s climate change, or just high water levels in the lakes?” Béland said. “I’m trying to get both countries to dedicate a study on ‘what can we do, how can we be more resilient, how can we help communities?’

“I think (climate change) is the biggest challenge that we have ever faced as human beings, as societies and as communities.”

For example, Béland said the IJC could bring experts together in multiple fields to discuss the situation and make recommendations to the governments.

And Corwin said she wants to ensure that since the IJC is making recommendations on policy, that its decision-making process continues to be as transparent as possible. This would involve getting feedback from the public and stakeholders, and ensuring that data collected for IJC studies continues to be made available so people can see how the organization has reached its conclusions.

“Leadership transparency is a top priority,” Corwin said. “Even though we’re not a government agency, we make recommendations to the governments on policy so I think it’s important that the organization be accountable to the public.”

Beyond the Great Lakes, the co-chairs and other Commissioners traveled across the transboundary for most of 2019, from the St. Lawrence River to the Yukon River basin in Alaska, Yukon and British Columbia.

They hope to visit remaining transboundary basins in 2020, including the Lake of the Woods and Red River basins. Corwin said she barely spent a week at home from May through September, and Commissioners continued to travel across the continent over the fall.

Individual Commissioners often have specific topics they want to look into, but these do not represent the views or priorities of the Commission until adopted by the Commission as a whole.

To read our profiles on the other four Commissioners, see: