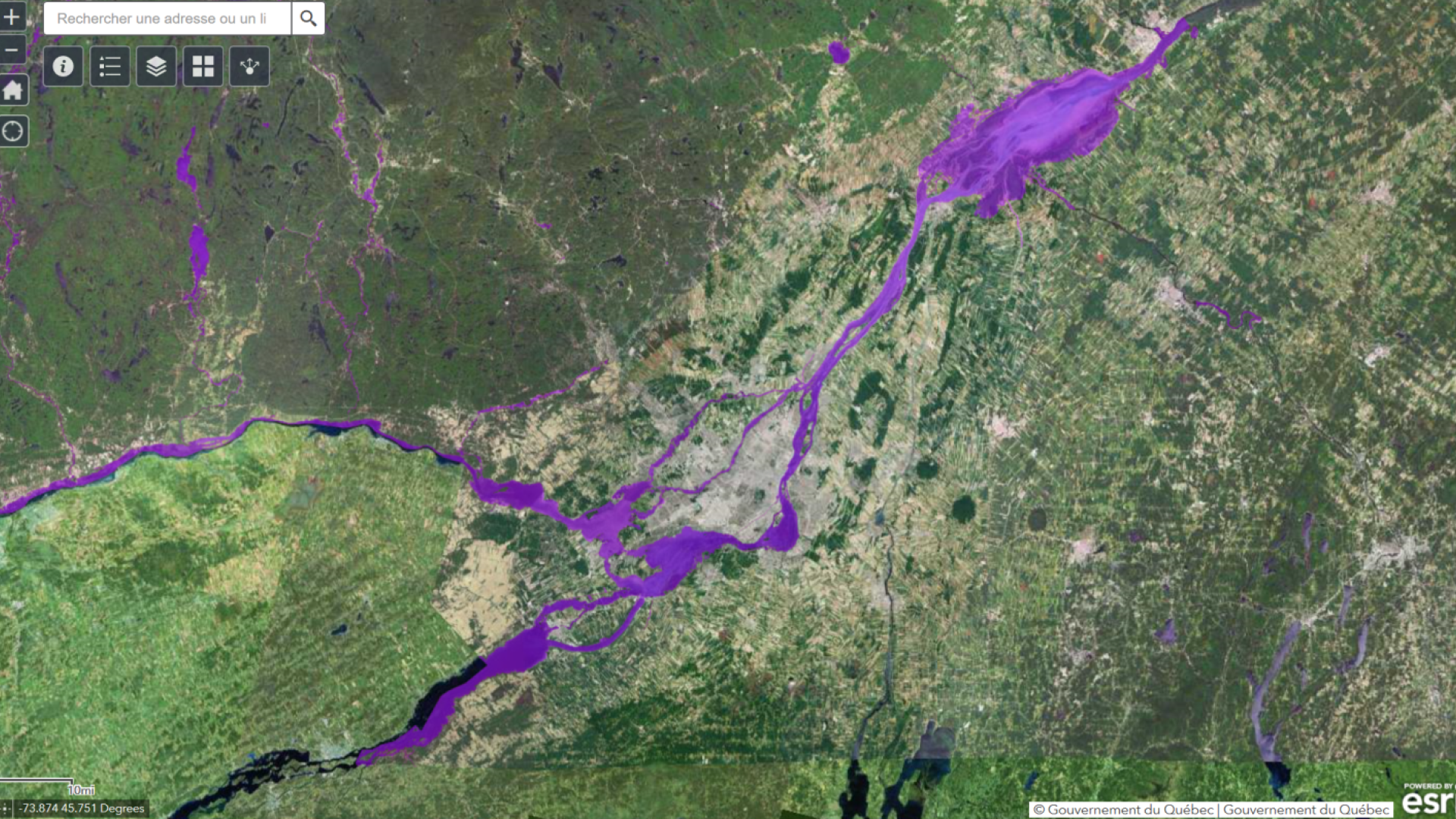 Caption
A screenshot of the Montreal portion of the St. Lawrence River from a new Quebec floodplain mapping tool. The purple color delineates “special intervention zones.” Credit: Government of Quebec

Record-breaking levels on Lake Ontario and the St. Lawrence River in 2017 and 2019 have taken a toll on homeowners, businesses and shoreline communities, demonstrating the need for governments to take a proactive approach to potential future flooding.

In March, Quebec released its 2020-2021 budget which included several details about the province’s proposed strategy to reduce its flood risk. The strategy includes CDN$473 million to implement solutions, in collaboration with municipalities and the scientific community, to mitigate the impact of flooding on communities.

Recently, Quebec also launched a new website which allows users to view updated floodplain data for more than 730 municipalities in Quebec, including many in greater Montreal. In addition, Montreal is launching a pilot mapping project that will provide detailed information on the severity level of potential floods by predicting the depth of submersion for specific areas. The mapping project also will assess the vulnerabilities of the areas within the flood zone, which will assist regions to implement appropriate resiliency measures.

Along with these new mapping tools, the province issued a moratorium on construction in high-risk flood zones including those that were flooded in 2017 and 2019. In addition, in “special intervention zones” where flooding occurred in 2017 and 2019, any homes damaged by 50 percent or more will be bought-out by the government. Finally, Quebec is capping provincial assistance for rebuilding after flooding at CDN$100,000 for the lifetime of a property, regardless of its location.

In May 2019, Gov. Cuomo of New York launched the Lake Ontario Resiliency and Economic Development Initiative (REDI) commission, stating that “intelligence and common sense dictates that this is the new normal” in reference to high water levels experienced in spring 2019.

The purpose of the REDI program is to ensure that communities along the shoreline of Lake Ontario can recover more quickly from flooding events and are better equipped to handle such future events. The program also is intended to bolster the upstate region’s economy, which depends largely on tourism. New York has committed US$300 million to the program which will be spent on infrastructure and economic development in affected shoreline communities.

The program is focused on finding practical solutions for the short term to alleviate pressure on lakeshore communities. However, rebuilding after a flood to ensure safety and resilience in the long term is a major focus.

Of the funding provided by the state, US$20 million will go to assist homeowners, US$30 million will be used to improve the resiliency of businesses, and another US$15 million will fund a major dredging project in the eight counties bordering Lake Ontario. The remaining US$235 million is being invested in local and regional projects.

On the Canadian side of the lake, in November 2019 Ontario released an independent expert review of flood management and 2019 flooding events across the province in 2019. The report found that weather conditions were the main cause of flooding in 2019 and that nothing pointed toward “human error.” The report also contained 66 recommendations concentrated around prevention, mitigation, preparedness, response and recovery.

The findings and recommendations of the 2019 Ontario Flooding Review informed Ontario’s Flooding Strategy, released in March 2020. The strategy proposes several actions to enhance the province’s preparedness, including:

Although no specific funding commitments were announced in the flooding strategy, the province said that it will work with the federal government to secure the required funding for certain activities.