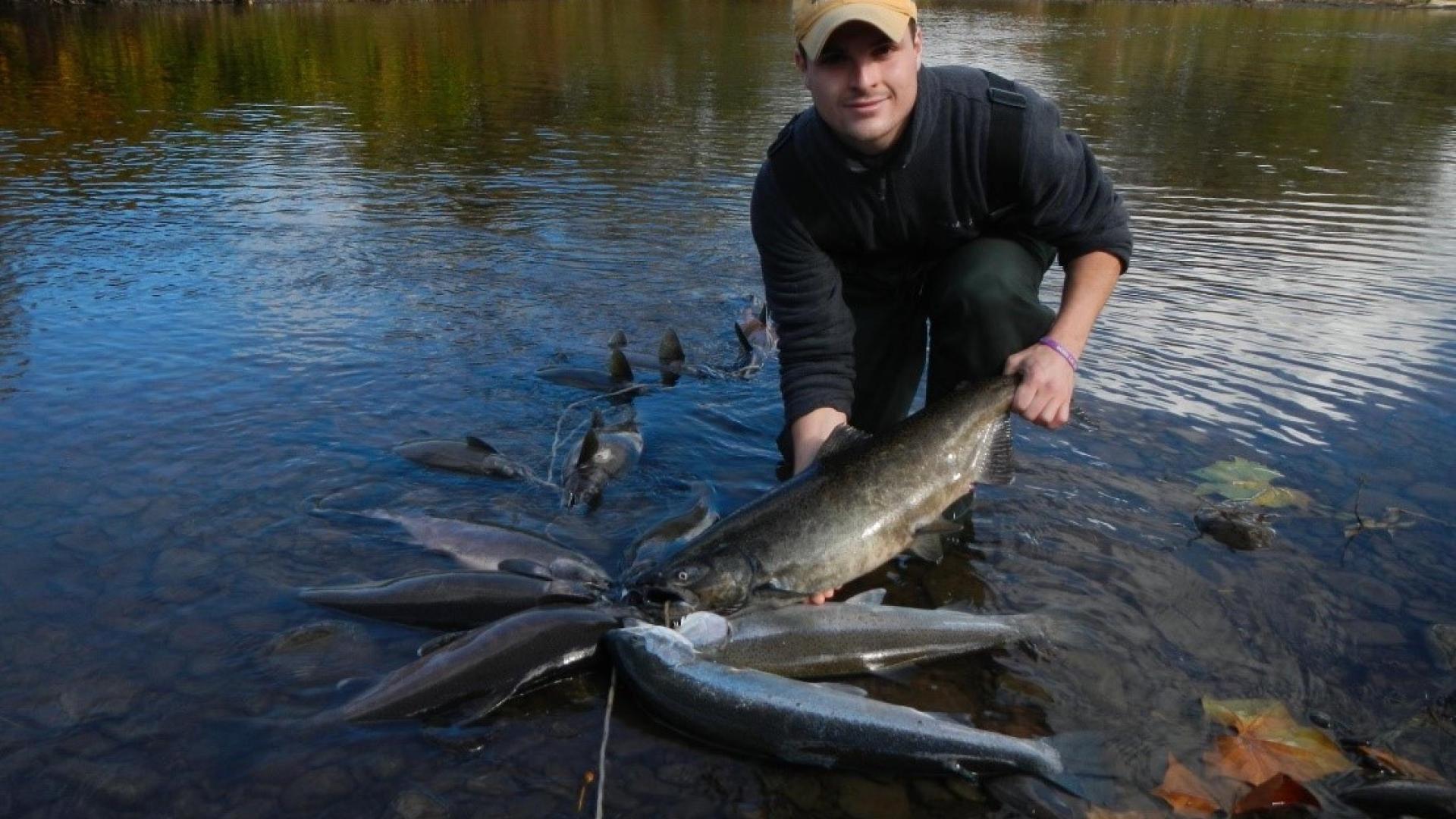 Matthew Futia received the 2019 Journal of Great Lakes Research/Elsevier Student Author Award as the first author of a top-ranked article, “Evaluation of adult and offspring thiamine deficiency in salmonine species from Lake Ontario,” published in August 2019. Futia discusses the research behind this award-winning article in the text below.

Salmon and trout species in the Great Lakes provide many values, promoting ecological balance throughout the food web and supporting an incredible recreational fishery that draws in enthusiastic anglers from around the world.

Many of the salmon and trout populations in the Great Lakes, except for those in Lake Superior, are maintained by stocking practices that release juvenile fish yearly. For these stocked juveniles to grow into massive trophy fish they must eat … a lot. Chinook, also known as king, salmon can grow to be more than 40 inches long and weigh more than 40 pounds.

The prey most frequently targeted by salmon and trout is the alewife, an introduced, fatty fish native to the Atlantic Ocean. While the high fat content of alewife helps salmon and trout grow quickly, consuming alewife also can cause a deficiency of thiamine (vitamin B1). Thiamine is an essential nutrient that plays many critical roles for generating energy and neurological development.

Thiamine deficiency in the Great Lakes, termed Thiamine Deficiency Complex (TDC), was first observed unknowingly in hatcheries during the 1960s when juvenile fish showed abnormal behaviors and high mortality rates. It wasn’t until the 1990s that biologists discovered thiamine treatments cured the health issues and increased survival rates in the hatcheries.

I first started studying TDC during the fall semester of 2015 as a graduate student in the Rinchard Lab at the State University of New York at Brockport, a small comprehensive state college in western New York just a stone’s throw from Lake Ontario.

Part of my research aimed to determine the extent of TDC for five species of salmon and trout (Chinook salmon, coho salmon, brown trout, lake trout and steelhead trout) in Lake Ontario, and compare how susceptible each species is to the deficiency.

Working with my adviser, Dr. Jacques Rinchard, we determined that all species except brown trout had low thiamine concentrations and experienced some degree of offspring mortality due to TDC. We also observed different dependencies on thiamine among species, with steelhead trout and coho salmon having substantially greater thiamine requirements. For example, steelhead trout may require three times as much thiamine as Chinook salmon to have similar offspring survival rates.

Understanding the impacts of TDC can help biologists and fisheries managers support a balanced food web and successful fishery. Our results suggest that TDC likely lowers the number of naturally-produced salmon and trout in Lake Ontario for all the species we studied except brown trout.

Lower total abundance of these predators could allow prey fish numbers to explode, which has previously caused massive die-offs of alewife. Fewer salmon and trout in the lake also would tarnish the world-class fishery that these fish create. To account for the limited wild production of salmon and trout, fisheries managers stock millions of juveniles into Lake Ontario every year.

However, fish with high thiamine concentrations (brown trout) or low susceptibility to TDC (Chinook salmon and lake trout) would be more likely to produce offspring that survive in the wild, adding more predators to the system. Therefore, managers and biologists work together to assess the current status of the fish communities, considering multiple variables such as the extent of TDC, and make appropriate decisions that have sustained the salmon and trout populations in the Great Lakes for decades.

Matthew Futia is a Ph.D. student at the University of Vermont and graduate research assistant in the Rubenstein Ecosystem Science Laboratory in Burlington, Vermont.