History of the IJC

The Boundary Waters Treaty helps Canada and the United States prevent and resolve conflicts over shared waters. Since holding its first meeting in 1912, the IJC has resolved more than 100 matters raised by the U.S. and Canadian governments. Some notable examples are provided below.

The Boundary Waters Treaty of 1909 is perhaps the most important bilateral agreement between Canada and the United States. Over the past century, it has provided a foundation for cooperation on shared natural resources on the basis of equality between the two countries.

Signed at a time when disagreement over the shared waterways – in several regions – could have divided the nations, the Boundary Waters Treaty established an organization, the International Joint Commission, to investigate, resolve and prevent boundary water disputes between the two countries.

Waters Treaty settled the dispute by apportioning the combined flow from the two rivers equally between the countries. The IJC then developed an apportionment regimeto carry out the Treaty provisions. In 2004, the IJC led a new round of consultations with basin residents on recent concerns about apportionment procedures.

Interview with Craig Palmer - Canal Controversy on the Border: The St. Mary Canal and Spite Ditch from International Joint Commission on Vimeo.

By the early 1900s, the discharge of sewage and manufacturing wastes led to outbreaks of cholera and other serious problems. An IJC investigation, requested by the two federal governments, included the largest survey of bacterial pollution ever conducted. The IJC's findings helped communities safeguard drinking water supplies and prompted other actions. Eventually, the two federal governments initiated sustained action to meet their Treaty commitment not to pollute the waters to the extent of injuring health or property in the other country. 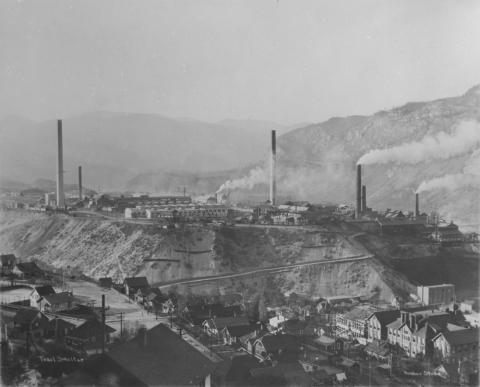 Sulfur dioxide fumes from a smelter in Trail, British Columbia were severe enough to cause damage in the State of Washington.

The IJC recommended remedial measures and a formula for payments to cover the damages.

The case set the precedent in international law that a country is responsible for the environmental damage it causes to another country.

A major study by the IJC set the stage for the coordinated development of water resources in the Columbia River basin. Principles recommended by the IJC for sharing flood control and electric power benefits also helped the two federal governments negotiate the 1961 Columbia River Treaty. Developing and operating the dams in a coordinated manner produced greater benefits for both countries.

A major hydroelectric power project in the St. Lawrence River approved by the IJC controls the outflow from Lake Ontario. The IJC set the flows to reduce flooding to shoreline communities, improve commercial shipping and generate electricity. Fifty years later, the IJC is reviewing whether the flow regime should be updated to reduce environmental impacts and achieve other objectives. 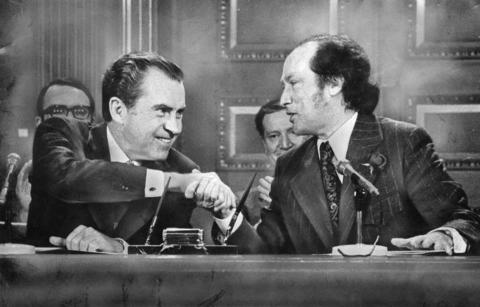 The IJC conducted a scientific study that helped officials in both countries agree on actions they would take to clean up the Great Lakes and meet their Treaty commitment regarding pollution.

Scientists working together on both sides of the border found other problems that led to a new agreement in 1978 and subsequent amendments.

Canadians objected to an irrigation project in North Dakota because they were concerned that the transfer of water from the Missouri River basin could introduce new fish, parasites and diseases to the detriment of fishing in the Hudson Bay basin. The IJC recommended against building the portions of the project that could affect water flowing into Canada until the risk of transferring organisms could be eliminated or the two countries agreed that it was no longer a concern. 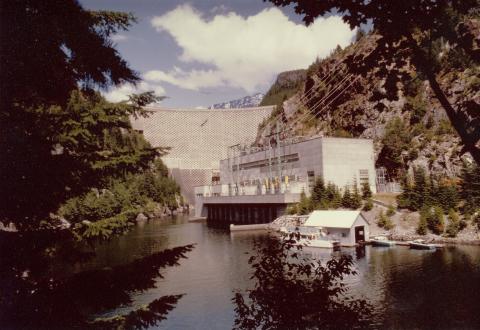 Many citizens objected to a proposal by the Seattle City Light Company to increase the height of Ross Dam because it would flood more than 2,000 hectares of a prime recreational area in British Columbia.

The IJC brought Seattle and British Columbia officials together to negotiate an agreement. Often referred to as a "paper dam," the agreement gave Seattle access to power from British Columbia at costs similar to the financing for the High Ross Dam.

It also included environmental enhancements in the Skagit River valley.

U.S. citizens objected to a proposed mountaintop-removal coal mine in British Columbia  because they were concerned it could pollute the Flathead River and decimate the trout fishery. After studies and public consultation, the IJC recommended that the mine not be approved until potential impacts on the fishery were eliminated and both sides found the other risks to be acceptable. 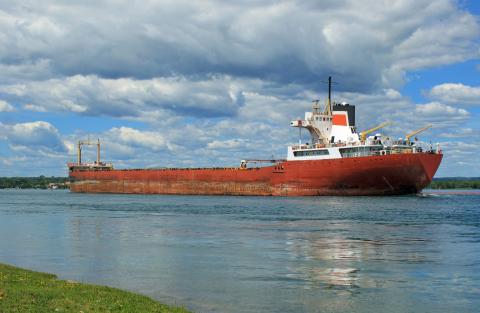 A proposal to ship Lake Superior water to Asia by tanker ignited a political firestorm throughout the Great Lakes basin.

The IJC recommended policies to protect the lakes from increased consumption of water inside the basin as well as removals from the basin. These recommendations encouraged action by the Great Lakes states and provinces and helped them develop effective policies.

The IJC initiated a study in 2000 to review its order to take account of the environment and recreational boating, interests that were not considered in a 1956 order of approval for regulating Lake Ontario outflows through the Moses-Saunders Dam.

The IJC later concluded that the regulation of Lake Ontario outflows in the international section of the St. Lawrence River should be based on revised goals. The IJC proposed a working group made up of representatives of the IJC, the federal governments, and the governments of New York, Quebec and Ontario. The purpose of the working group would be to provide advice on a regulation package that would meet revised goals and be mutually acceptable to the federal, state and provincial governments, and to the IJC.

The IJC combined the apportionment and alerting responsibilities of two separate boards into a single International Souris River Board. The board gained additional responsibilities and members after the federal governments asked the IJC to assist with the implementation and review of a Joint Water Quality Monitoring Program and perform an oversight function for flood operations, both of which had previously been carried out under the 1989 Canada-United States agreement. 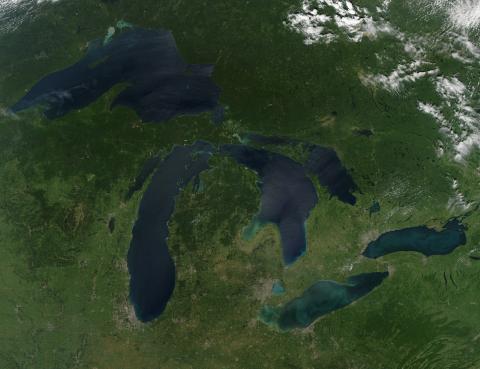 The International Upper Great Lakes Study was launched as an independent examination of a nearly 30-year-old regulation plan for outflows from Lake Superior.

After five years of study by experts from federal, state and provincial governments and academia, a peer-reviewed report was submitted in March 2012, with findings concerning low water levels and recommendations to improve the management of levels and flows in lakes Superior, Huron, Michigan and Erie. The IJC issued Advice to Governments in April 2013.

The IJC initiated the first sub-study, an investigation of water levels for Osoyoos Lake during drought years, in close collaboration with the IJC’s board and the Washington State Department of Ecology.

An International Osoyoos Lake Board of Control recommended that the IJC encourage continued cooperation between British Columbia and Washington state to balance flow needs across the International Border and downstream of an existing dam, while respecting goals for Osoyoos Lake elevations and limits on releases that are possible from Okanagan Lake.

The Board also recommended a rule curve to provide additional seasonal flexibility in achieving targeted lake levels, and accommodate multiple uses and users of the lake. The IJC issued an updated Order of Approval in January 2013. 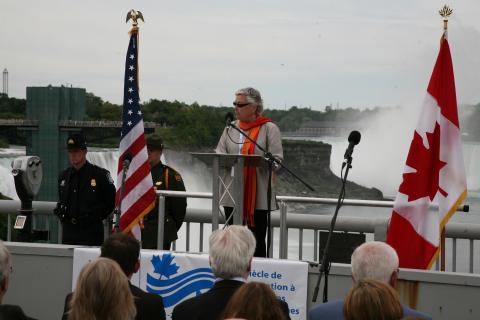 The 100-year anniversary of the signing of the Boundary Waters Treaty was celebrated with events in June, including a historic ceremony on the Rainbow Bridge connecting Niagara Falls, New York, to Ontario, Canada.

The events were hosted by IJC and the Niagara Region's 10 municipalities. Dignitaries from the U.S. and Canada attended, along with former IJC commissioners.

IJC commissioners also participated in a Canada Post release of a stamp commemorating the centennial of the Treaty.

Other events included a Model IJC Conference, a public meeting on the Review of Restoration Progress in the Niagara Region, a policy workshop on the Lake Twinning initiative, and conferences on Areas of Concern and Connecting Channels in the Great Lakes. 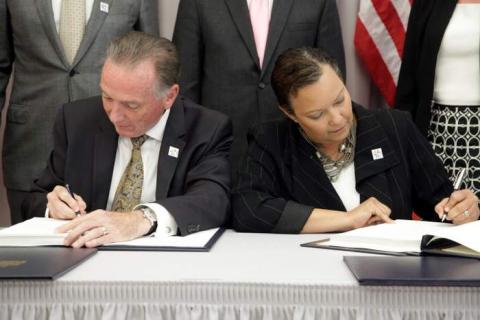 The governments of Canada and the United States updated the Great Lakes Water Quality Agreement for the first time since 1987.

Under the renewed Agreement, the governments conclude that the "best means to preserve Great Lakes Basin Ecosystem and improve water quality" is to adopt common objectives, cooperative programs and assign special responsibilities. The Agreement directs the IJC to analyze and share information on transboundary pollution, assist in developing water quality objectives, and convene the Great Lakes Public Forum.