Climatological conditions within the Okanagan/Okanogan and Similkameen River basins varied during 2022, with the greatest impacts related to a cool spring leading to delayed snowmelt and a delayed freshest peak at Osoyoos Lake.

In general, precipitation in the basins was below normal throughout 2022. Due to the below-average spring temperatures, snowpack in the basin reached their maximum later and persisted longer than normal. This late snowmelt resulted in a delayed peak discharge of the Similkameen River freshet (Figure 1) and Osoyoos Lake levels (Figure 2).

Osoyoos Lake elevation exceeded ranges specified in Conditions 7 and 8 of the International Joint Commission (IJC) 2013 Order of Approval from June 8 to July 26; however, the dam operator remained in compliance with the IJC Orders as Zosel Dam’s gates were fully opened during this period (Figure 2). Osoyoos Lake levels reached a maximum elevation of 912.99 feet on June 22 during which flows on the Okanogan River were measured at 3,120 cubic feet per second, effectively confirming the conveyance capacity of Zosel Dam of at least 2,500 cubic feet per second when Osoyoos Lake’s elevation is 913.0 feet. During the 2022 freshet period (May-July), backwater conditions from the Similkameen River on the Okanogan River were negligible, if present. On Okanagan Lake, an above-average, but normally timed, freshet occurred in 2022 (Figure 3).

None of the three drought criteria outlined in Condition 8 of the IJC Order for Osoyoos Lake were met; therefore, a drought was not declared for the basin in 2022. Similkameen River discharge as measured near Nighthawk, Washington, became unavailable beginning November 12, 2022, due to ice-affected data.

In 2023, lake and river levels have been below average in the Okanagan/Okanogan and Similkameen watersheds. Temperatures have risen again to above normal for January 2023 while precipitation has remained below normal. 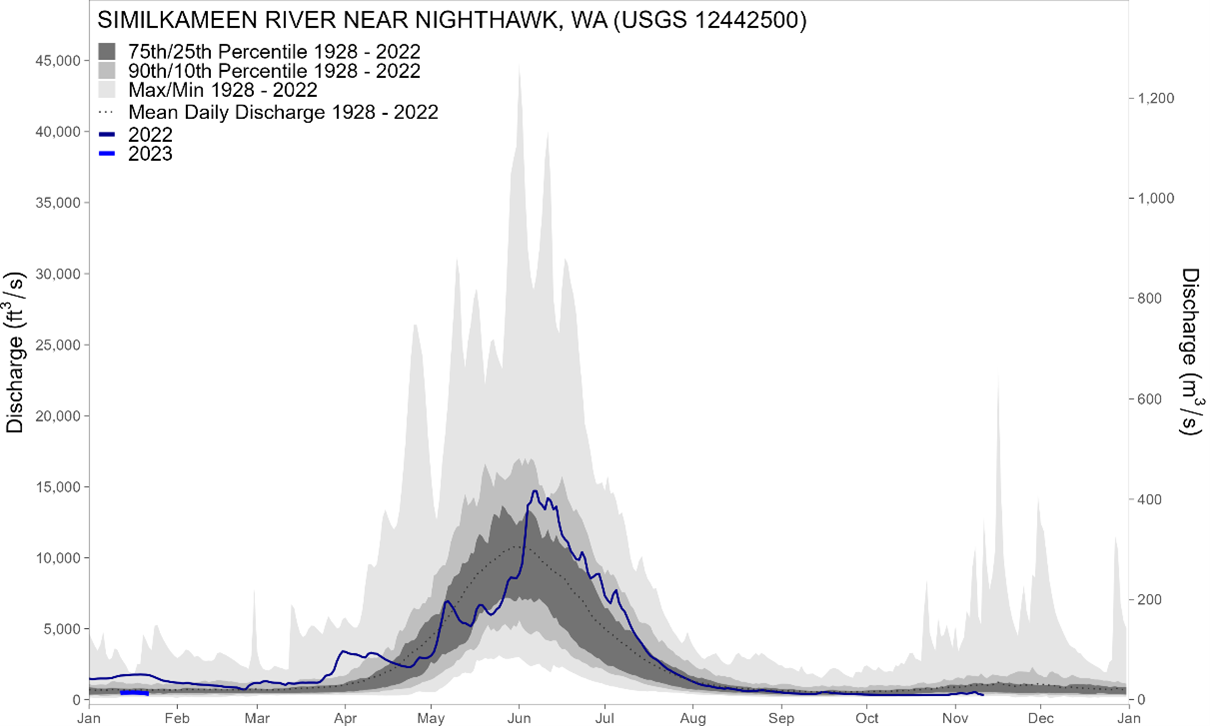 Figure 1. The delayed Similkameen River peak discharge is delineated by the dark blue line compared to historical peaks in gray. Data from November 12, 2022, to January 11, 2023, was unavailable due to ice cover. 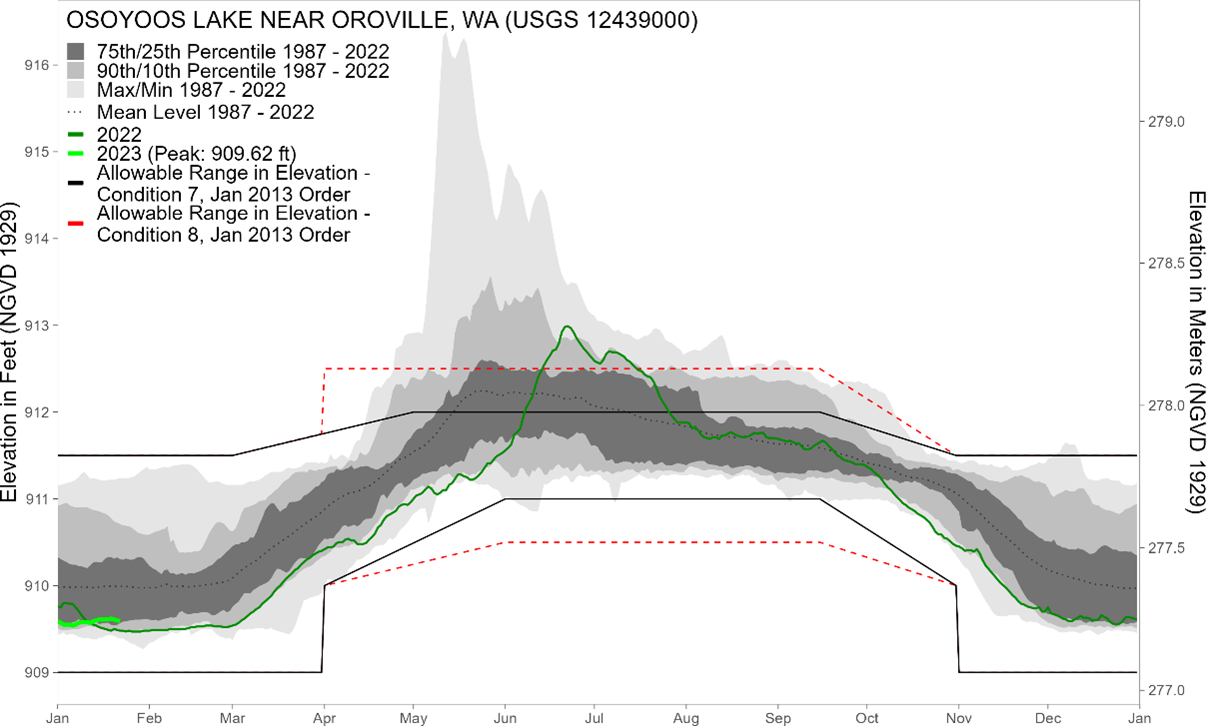 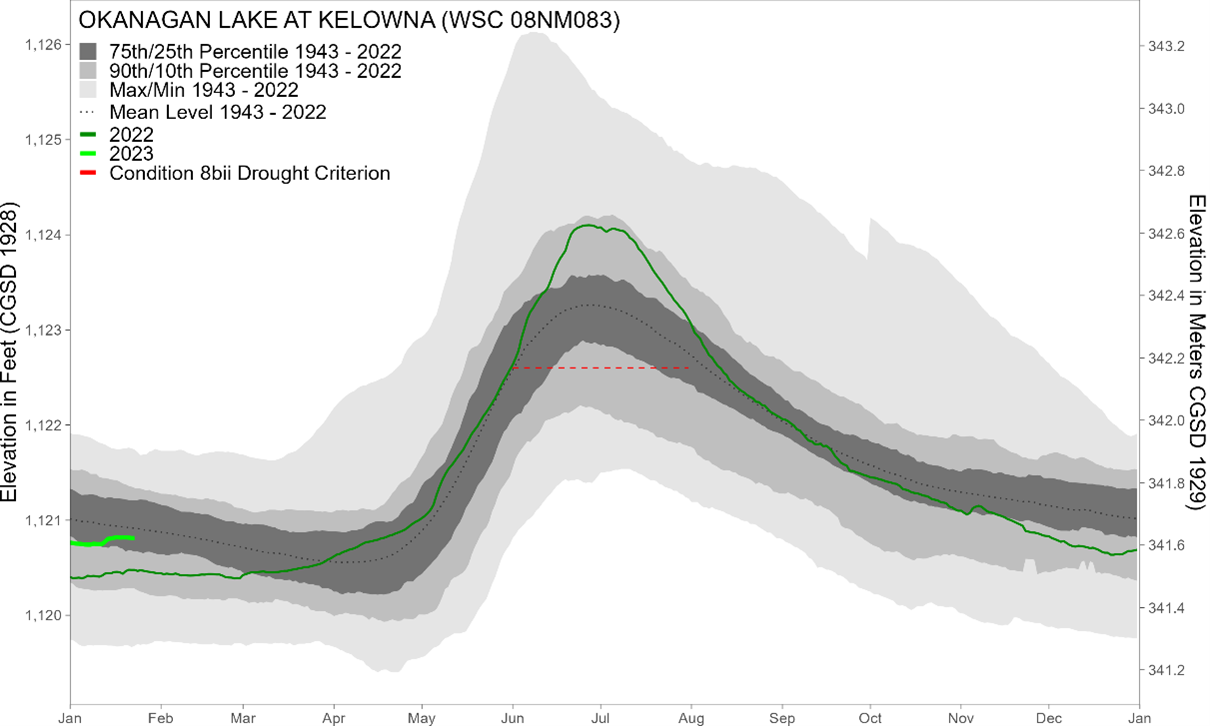 Snowpack in the Similkameen basin have started off the 2023 water year (October 1, 2022, to September 30, 2023) below average while those in the Okanagan basin are currently near or above average. Of particular note is the status of the Mission Creek Automated Snow Weather Station in the Okanagan basin. This station had been unavailable until recently due to equipment malfunction to provide snow water equivalent (SWE) data for the water year. However, data are now reporting in real-time via usual channels (Automated Snow Weather Station Graph). This is a key snow station, where the lack of SWE data would have impacted both the qualitative understanding of the snowpack and the 2023 freshet inflow forecasting for the Okanagan River basin.

Please monitor the Osoyoos Lake Board of Control site for further hydrologic conditions updates as the winter progresses. Real-time Osoyoos Lake levels from the US Geological Survey are available under the  “Information” link, while the IJC 2013 Order of Approval for Osoyoos Lake can be found at IJC.org.