Q: Why did the flooding occur in the spring and summer of 2022 and how severe is it?

A: The Rainy River basin is one area of a much larger region that has seen record or near-record flooding this spring. This area extends to the north (English River basin and beyond) and west (Red River and other regions of Manitoba).  The high-water conditions have followed well above-normal precipitation across the region nearly every week from the last two weeks of March through the end of May. 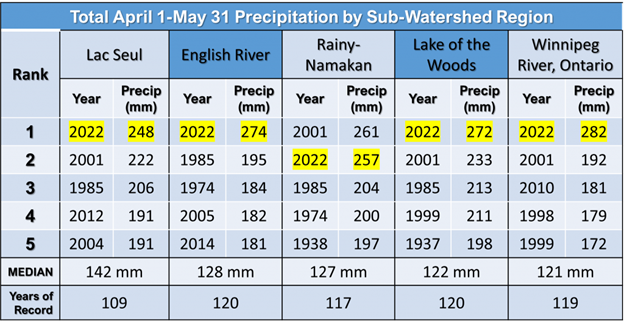 This precipitation fell largely as snow until late April, adding to the winter’s accumulated snowpack. A series of Colorado Lows brought widespread, heavy rainfall, causing a rain-on-snow melt period over frozen ground from late April through much of May. The rapid runoff of the rain and snowmelt led to record flows in many tributary rivers including all major tributaries to Rainy Lake and Namakan Chain of Lakes. With this, the total inflow to the Namakan Chain of Lakes and Rainy Lake set records for the April-May period, far exceeding the outflow capacity of the dams at either lake outlet. This also occurred at natural (undammed) lakes in the watershed, such as Lac La Croix.

These record flows resulted in an extended period of uncontrolled lake level rise for both the Namakan Chain of Lakes and Rainy Lake despite the dams being fully opened by the dam operators well before the lakes rose above the IJC’s “All Gates Open” level. For Namakan Lake, the level has risen to the highest point since 1916, rounding over just shy of the record set in that year. For Rainy Lake, a new record was set, 7 cm (2 ¾ in) higher than the previous record, set in 1950.

The resulting flooding has caused widespread damage to communities, homes, businesses, and natural shorelines. First Nations, municipalities, and counties around Rainy Lake and the Namakan Chain of Lakes declared states of emergency. States of emergency have also been declared for other communities in the Rainy River watershed that border other water bodies due to the flooding (e.g. Seine River, Lac La Croix, Rainy River). Beyond the Rainy River, states of emergency were declared in locations as widespread as Sioux Lookout and in the Whiteshell region of Manitoba. Evacuations took place in the Whiteshell and at Grassy Narrows First Nation on the English River.  This event was a wide-ranging natural disaster. Unlike other natural disasters such as earthquakes and tornadoes, this one is caused by multiple weather events, as week after week of above normal precipitation fell through April and May, filling all available storage space and flooding water bodies across the region.

Flood mitigation efforts such as sandbagging have been extensive across Winnipeg River basin in an effort to protect critical infrastructure, homes and businesses with thousands of hours of volunteer effort.

The Canadian Lake of the Woods Control Board produced a webinar May 10 that describes in greater detail how basin conditions led to spring flooding across the larger Winnipeg River basin  this spring.

Q: Why did the Water Levels Committee decide in March to follow the standard rule curve and not use the High Flood Risk Curve

Current Conditions at the time of the decision: 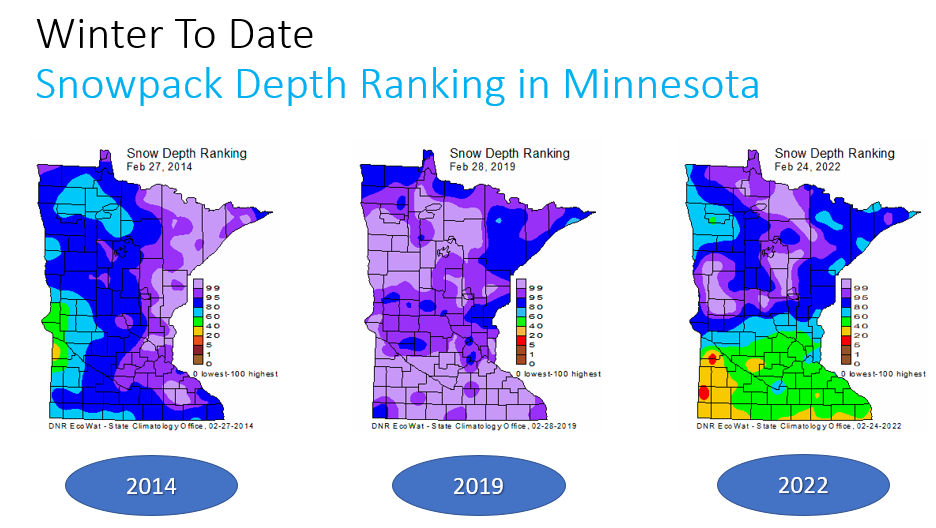 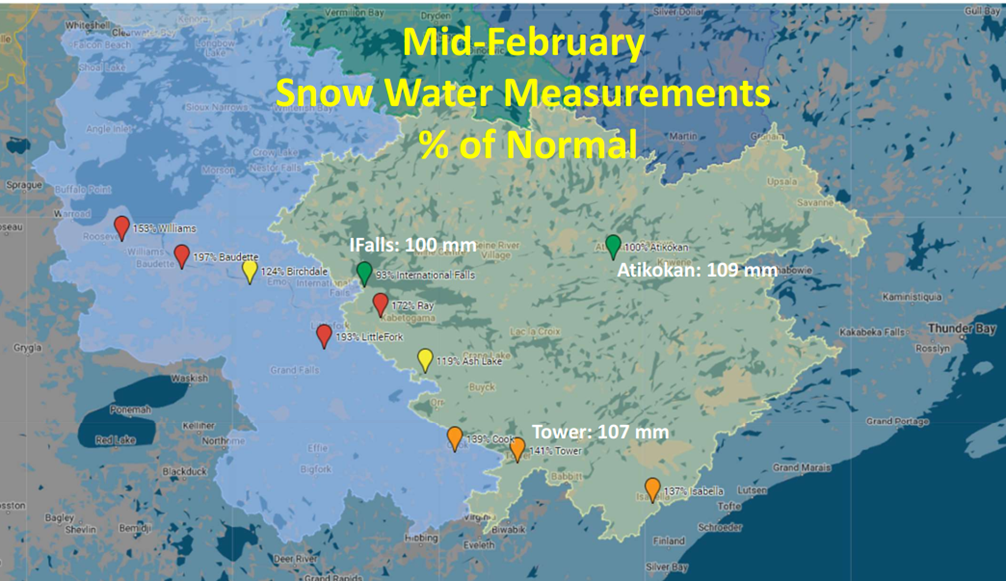 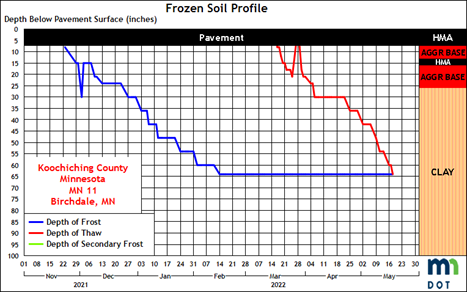 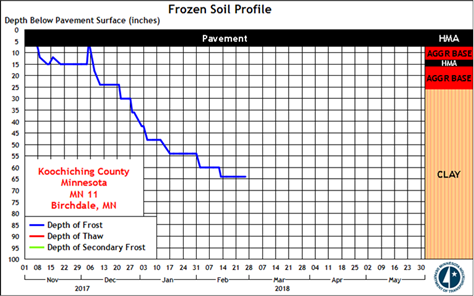 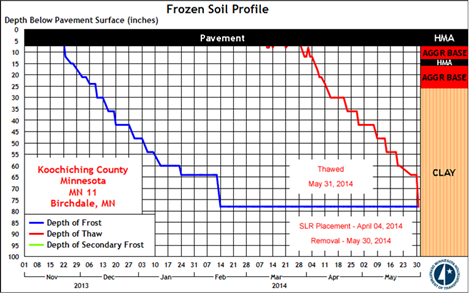 Forecast information available at the time:

Feedback from basin interests is consistent with the information provided by the Water Levels Committee at the pre-spring engagement.

Following the pre-spring engagement, the Rainy Lake Property Owners Association wrote to the WLC with the following points:

1. Temperatures are expected to remain well below freezing at night during the extended forecast. This may potentially push the ice-out date into mid-May creating the potential for freshet and spring rains to enter the basin at the same time.

2. It is reported the lake have a much as 32 inches of ice at this time.

4. Basin wide combination of rain and heavy wet snow (according to the national weather service 6 in of water) in early November has been held up in the bush and will enter the water shed this spring.

The WLC reviewed the feedback provided by RLPOA with the following assessments: 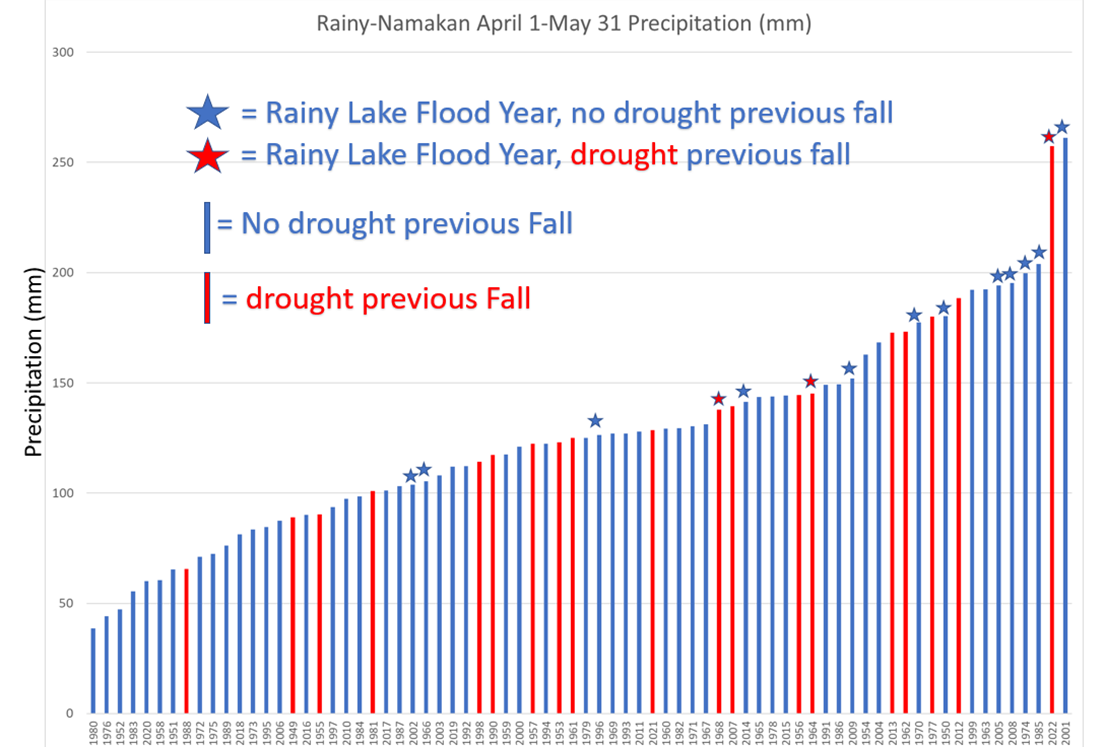 There was approximately 6 inches of snowpack accumulation by the end of November in the area around Rainy lake, but this is not 6 inches of water.

Hydrologically, water is always moving through the system and does not get “held up” in the bush to be released later unless it is accumulated as snowpack. Most of the month’s precipitation occurred on November 11 and 12 when temperatures were near the freezing mark. According to the National Weather Service data, between a trace and an inch of accumulated snow water equivalent followed this precipitation, much of it entered the system as runoff. The response to this can be seen in the hydrographs of the area tributaries. This precipitation did not significantly alter the flows in the basin but it did result in some drought category improvement.

In summary, at the Pre-Spring Engagement web meeting, the Water Levels Committee summarized the factors that contribute to spring flood risk and the situation in 2022 compared to 2014.

Taken together, the Water Levels Committee evaluated that the balance of these risk factors indicated some risk of above normal spring flow conditions, but not a high risk of flooding or of exceptionally high or record inflows in the spring. The Water Levels Committee emphasized that the last of the risk factors for spring flooding on Rainy Lake is the timing and amount of spring rainfall. This cannot be estimated in advance and would prove to be the critical ingredient in the record inflows of the spring.

Why didn’t the Water Levels Committee lower the lake later in March with the extra snow accumulating?

The first two weeks of March saw very little precipitation across the watershed. Statistically, the snowpack depth by mid-March had returned to the normal range for much of the American side of the watershed.

There was little change in the Snow Water Equivalent estimates over this period. On-the-ground Snow Water Equivalent measurements by Ontario Power Generation at Atikokan were in line with the National Weather Service model, indicating some loss of water from March 1 to March 15, followed by some accumulation over the remainder of the month. The April 1 reading at Atikokan was 5 mm (0.2 in) higher than on March 1.

The Water Levels Committee announced on March 10 that it had directed the dam operators to target a Rainy Lake level between 336.90 and 337.0 m on March 31. The lake was lowered 10 cm (4 inches) in March as a result. 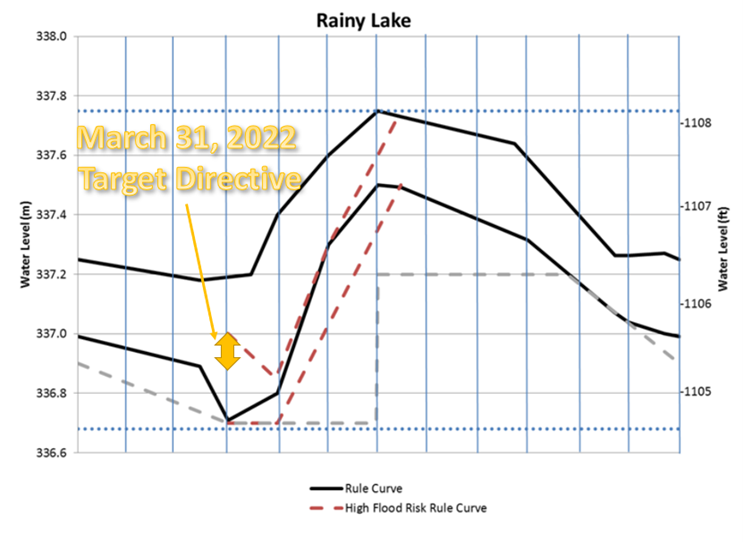 While not targeting the High Flood Risk Curve specifically, this level target range was within High Flood Risk Curve range and in the bottom half of the normal Rule Curve band for March 31. In short, the Water Levels Committee hedged against above normal spring flows in line with the basin conditions, but did not identify a high risk of flooding as March progressed.

How much lower would the level of Rainy Lake be if the Water Levels Committee had followed the High Flood Risk Rule Curve?

This has not yet been modeled, as the event is still happening. The Water Levels Committee will conduct a post-event analysis to answer this question. The middle of the High Flood Risk Rule Curve on April 15 was approximately 20 cm below the actual level on April 15, 2022 and 30 cm (12 in) above the very bottom of the High Risk Curve range.

During the review of the Rule Curves from 2015-2017, extensive work was done to analyze and assess the effect of lower spring targets on peak water levels during high inflow springs. This work was reviewed on many occasions with the Citizens Advisory Group. This work included simulations of historical high flow springs since 1950 using the new 2018 Rule Curve and the High Flood Risk Rule Curve and comparing the peaks to the existing 2000 Rule Curves.

It may be difficult to understand how having the level up to 30 cm (12 inches) lower on a lake as large as Rainy Lake could not substantially reduce the peak. There are two key points to consider. The first is the extreme inflows to the lake over the April-May period, a new record and nearly four times the flow normally seen in this period. Between April 15 and Jun 13, enough water flowed into Rainy Lake to fill the equivalent of the storage at very bottom of the High Risk Flood Curve (30 cm or 12 in) every two days on average, 30 times over these 60 days. This is simply an enormous volume of water, unprecedented since records began

The second, and more important, factor is the constrained outflow from Rainy Lake. When the Rainy Lake dam is not backing up water to the lake, the outlet near Rainier / The Point limits the rate of flow out of the lake into the upper river (see fact sheets and videos for more details). On April 15, the maximum outflow from the middle of the High Risk Rule Curve band is 25% less than if the lake is in the middle of the regular Rule Curve. The higher lake level drives higher outflow. If following the lower target, each day the level rises a little faster than if following the higher target, and this happens day after day until the two are very close together. This is generally true of outlet-limited lakes, including Lac La Croix, Namakan Lake and Lake of the Woods, and is why in the 1950 flood simulations the High Flood Risk Rule Curve only reduced the peak 2 cm (1in) compared to the normal 2018 Rule Curve.

Q: What actions did the Water Levels Committee or the IJC take to address the high water.

A: Given the extreme, record inflow, no action at the dams could be taken to prevent the flooding on the Namakan Chain of Lakes or Rainy Lake. As inflows quickly picked up in mid-April and the likelihood of flooding increased quickly, the focus of the Water Levels Committee was on ensuring that the dam operators increased flow according to the IJC Order, and in sharing key hydrologic and forecast information with the agencies responsible for flood forecasting in Ontario and Minnesota.

At Namakan Lake, all logs were pulled from the two dams by April 26, well below the All Gates Open level for that lake. At Rainy Lake, gates were opened as the lake level rose, adding flow to match the natural outflow capacity of outlet of the lake (for more information on the limitations of outflow from Rainy Lake see this factsheet and a series of three educational videos).  All gates at Rainy Lake dam were opened by May 5, again well before reaching the All Gates Open level. With all gates and sluices fully opened at the three dams, there were no additional actions that the dam operators or the Water Levels Committee could take to pass additional water. The rate of water released from both lakes steadily rose as the water levels of the lakes increased, but remained well below the inflow rates as week after week of above-average precipitation continued to fall. The average inflow rate to both lakes for the April 1-May 31 period was the highest on record.

The Water Levels Committee Engineering Advisors worked closely with Ontario and the US National Weather Service to provide advice on forecasts for the levels of both lakes three days a week. At the end of May, the U.S. Co-Chair of the WLC and local US member visited with officials and community members around International Falls. The WLC and IJC representatives, including a U.S. Commissioner, also traveled through the larger basin to meet with affected residents and community officials during the week of June 6, 2022. Local WLC members have been in regular contact with affected residents, providing information and answering questions.

Q: Where can I find the latest news on weather forecasts and flood information?

The US National Weather Service and the Province of Ontario are maintaining information through their websites. The Canadian Lake of the Woods Control Board also has been posting updates on its website Notice Board, and provides updates to recent outflows and water levels throughout the basin on their water flow data page.