2.1 What types of solutions are being considered to reduce the impacts of flooding?

The Study Board is evaluating several options, categorized into four themes (see below). The Study Board’s recommendations may include actions from more than one theme. 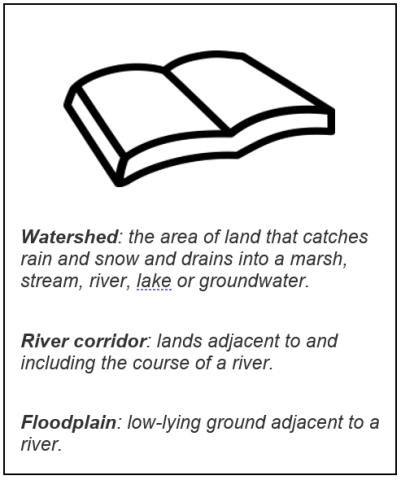 View the fact sheet describing the preliminary flood mitigation framework on our website.

2.2 How will the study make sure that recommended solutions will benefit and not harm the economy, communities, and the natural environment?

The study is working to ensure that benefits of recommended solutions outweigh negative impacts through ongoing communications with stakeholders, rightsholders and the use of computer modeling.

Study scientists are creating a complex computer model to assess and compare potential solutions against impacts on the economy, society and the environment.

Key criteria (known as “Performance Indicators”) within the model will assess the degree to which mitigation measures could help decrease damages to residences, businesses, infrastructure and crops, as well as provide improved protection to vulnerable populations. Other Performance Indicators will assess potential environmental impacts to wetlands, fish, wildlife habitats and endangered species. Potential impacts on cultural resources to Indigenous populations and recreational water use will also be considered using this model, dubbed the Integrated Socio-Economic Environmental (ISEE) model.

The study team is also discussing potential structural and non-structural actions. The team is evaluating the impacts and benefits of these actions with the public, Indigenous peoples, business owners, interest groups, municipal leaders and elected officials in Quebec, New York, and Vermont to determine the level of social and political acceptability of the study’s proposed measures. Additionally, social scientists are leading a basin-wide risk assessment survey of members of the public to inform our understanding of public perception of proposed mitigation measures.

2.3 Can water from Lake Champlain be diverted to the Hudson River via the Champlain Canal to help minimize flooding in the Richelieu River?

The Hudson Diversion extends from Whitehall, New York in the South Bay area to Fort Edward over a total distance of 33.6 km (21.5 miles). The total elevation from the lake to the Hudson River is 13.3 m (43.5 ft.). The distance, lift, and volume of water that would need to be pumped up and out to reduce water levels in Lake Champlain make this alternative unfeasible.

2.4 Can the Chambly Canal have an effect on flood reduction?

The Chambly Canal is a manmade channel that stretches about 20 km (12 miles) along the Richelieu River. Originally built in the 1840s for commercial shipping, it has since been repurposed for recreational boating and is managed by Parks Canada as a National Historic Site. The canal was widened in the river along 800 m (2625 ft.) in the 1970s, and an International Joint Commission study from that time found that this likely raised water levels in Lake Champlain by 3-10 cm (1.2-4 inches). The Study Board is investigating if it is viable to modify that section of the canal to allow it to safely pass higher water flows during years where the region is at risk of flooding. At present, the canal and its lock systems were not built to withstand high water flows. If this is determined to be a viable solution, the Study Board will work with the Government of Canada to determine how the canal could be modified to allow for higher flows to pass through it.

If the study finds that using the Chambly Canal as a flood reduction measure is a viable solution, the Canal would still remain under the jurisdiction of Parks Canada but a binational governance structure would be recommended to operate its use in times of flooding.

View the fact sheet on the Chambly Canal on our website.

2.5 Will lowering water levels with structural measures affect recreational activities, such as boating and fishing?

Acting to lower water levels in the Richelieu River is only one of several possible scenarios to mitigate flooding. The likelihood of governments implementing this scenario is small, but if it does, the study will produce detailed statistical information on the impacts of lowering water levels. Lake levels have generally been rising for decades, so small reductions may not have much impact.

2.6 Is the Board exploring the protection, enhancement and potential expansion of existing wetlands to help with water storage?

Yes, the Board is considering this as an option, although storing floodwaters in wetlands is complex and needs to be evaluated in terms of its positive and negative impacts. . The study is developing a wetland evolution Performance Indicator to estimate the impacts of flood mitigation on wetland area and composition.

While the Board is studying wetlands as a flood mitigation tool, these ecosystems can have several other benefits, such as reducing the severity of low flows under drier conditions. Additional benefits such as this may be factored into the economic analysis of the study.

Preserving and protecting existing wetlands is an important step in reducing the magnitude of future floods in the basin and modelling has shown that existing wetlands contributed to a significant reduction in water levels in 2011. Although the focus of the study is to investigate solutions to major floods such as the event of 2011, modelling is being used to determine the extent to which wetlands can reduce damages from minor to moderate flood levels as well.

2.7 Are other water storage options being considered, such as using agricultural land?

The Board has modelled the impact of storing flood water on agricultural land as a temporary measure. Results show that it would require a considerable amount of land to start to see any substantial flood reduction. In the Lake Champlain basin, approximately 7% of the area is currently wetland. Modelling suggests that for a 5% reduction of the 2011 peak flow at Fryers, it could take up to 18% of agricultural land and wetland area to be flooded.

2.8 In extreme conditions such as the 2011 Spring flood, the river upstream of Saint-Jean-sur-Richelieu can receive water from Missisquoi Bay, how much does this contribute to the flow of the Richelieu River?

When the water level in Missisquoi Bay rises enough, there is a hydraulic connection through the wetlands which contributes to the flow of the Richelieu River, however modelling has demonstrated that the amount of flow through this connection is negligible when compared to the outflow at Rouses Point (i.e., less than 1%).

2.9 Is the study considering the construction of dams in the basin to manage water levels and lake outflows/inflows?

The study is examining moderate structural measures as a solution to mitigate floods.  These constitute weir-type structures near or at the St-Jean shoals in Quebec. The study is not examining the option of constructing larger structures such as a dam as a potential solution. The preferred option that is being examined involves making use of a pre-existing structure in the river (the Chambly Ccanal) and the cost-benefit of that option is under consideration.

Lake Champlain water levels are not managed on a basin-wide scale. There are a handful of dams that manage between 2% and 3% of water throughout the entire system.

View the Dams and Reservoirs in the Lake Champlain-Richelieu River Basin fact sheet on our website.